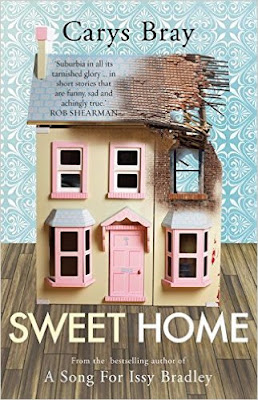 About Sweet Home
Meet the little boy who believes in miracles.

Meet the mother who loves to bring babies home from the newborn aisle of her supermarket.

Meet the husband who carves a longed-for baby out of ice as a gift for his wife.

Meet the widow who is reminded of romance whilst standing at the kitchen sink.

In this prize-winning short story collection, Carys Bray weaves together moments of joy, heartache, sadness and unwavering love as told through seventeen very different notions of home.
My review of Sweet Home
*I listened to the Audible version of this book*
Sweet Home is a collection of 17 short stories that all revolve around the central theme of love. But to describe these stories in such a simplistic way does not do them justice. These stories are about the heartache that parents face, those nagging doubts that plague our every day rituals and those dark, dark secrets that none of us ever want to tell. This collection of short stories is honest, fresh and makes you stop and think about life.
I love listening to audio books, they keep me company while I am ironing, walking into town and when hovering up copious amounts of Cheerios. But with this book, I could not do anything else. I simply had to sit, sip my coffee and listen. I needed to absorb the words, to fully understand what the narrator was telling me. This book had my undivided attention.
These stories speak to the soul. We hear from a boy who is coping with the death of his sister, the woman who buys babies from the supermarket, the woman who yearns for  a baby after a miscarriage and the old woman who builds a house out of sweets and shortbread. All of these stories are very different, all with their own unique tale to tell, but all revolve around love. The love for a son, a daughter, mother, father. The central theme is that of unconditional love.
I loved each and every single story, but a few really stood out to me, I think because they spoke to me on some unconscious personal level. It was while I was sat in Sainsbury's café, sipping coffee before I needed to hop on the bus home, that I listened to the story about the mother of a child with Asperger's syndrome. I had to stop drinking my coffee so that I could fully immerse myself in the words. My youngest son has autism, and so from the very beginning of the story I knew that her son was autistic, before even being told. I listened to how she felt, her struggle to make
her son feel accepted and her fight for others to accept him as he was. One scene in particular, where she describes a note pinned to the classroom wall had me choking back tears. A picture of her little boy had been pinned up, while underneath it said that he had Asperger's syndrome. I understood why the mother thought this was so very cruel and rejoiced when she made the teacher in question, take it down.
I also felt emotional when listening to the story about the dad who was trying to bring his son back from the depths of drug addiction. His vivid descriptions of the little boy that his son used to be nearly broke my heart. Images of my two little boys flooded my mind.  Who knows how our children will end up?
What I don't want to convey is the feeling that these stores are somehow depressing, because they aren't. Although many deal with loss and the insecurities that all parents feel, in listening to these thoughts and feelings, you actually bond with the person who is telling the story. You realise that the thoughts and feelings that you have yourself, are actually ok, that they are human. You realise that it is ok to talk about these feelings, and this is the main point that I want to get across. This book is hugely uplifting. It restores hope. There are also many funny parts in these stories, especially in the descriptions of the children and what children get up to. I was remanded of my own childhood growing up in the north of England, and fond memories came flooding back to me.
Sweet Home really is a treat of a book.  I highly recommend it. It gest a whopping 5 stars from me.
Sweet Home is available on Audible and Amazon.
About Carys Bray
Carys Bray's debut collection SWEET HOME won the Scott prize and selected stories were broadcast on BBC Radio Four Extra. Her first novel A SONG FOR ISSY BRADLEY was serialised on BBC Radio Four's Book at Bedtime and was shortlisted for the Costa Book Awards and the Desmond Elliott Prize. It won the Utah Book Award and the Authors' Club Best First Novel Award. Her second novel THE MUSEUM OF YOU was published in June 2016.

Carys has a BA in Literature from The Open University and an MA and PhD in Creative Writing from Edge Hill University. Her story 'Codas' will be published in HOW MUCH THE HEART CAN HOLD: SEVEN STORIES ABOUT LOVE in November 2016. She is working on a third novel.
Posted by jo at 05:00