All The Places I've Ever Lived by David Gaffney 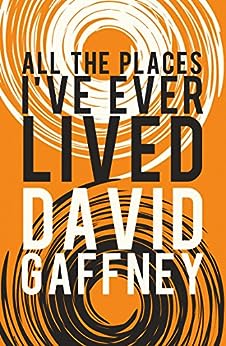 About All The Places I've Ever Lived

Part murder ballad, part ghost story, part true crime, All The Places I've Ever Lived takes you on a gripping journey from the small-town murder of a teenage girl in the 1970s to the recent real-life shootings in Whitehaven, West Cumbria. Are the crimes linked? Fifteen-year-old Barry Dyer may have the answers, but when events impact so horrifically on a town and its people, it always pays to tread carefully when revealing the truth…

Quirky, disturbing, and haunting, All The Places I've Ever Lived is a moving and tender exploration of a teenage outsider in a small community, as well as being a finely wrought portrayal of West  Cumbria, where nuclear plants, thermometer factories and chemical works contrast vividly with the desolate beauty of the Lake District.

My review of All The Places I've Ever Lived

Wow! Well this book is incredibly weird, dark, fantastical and extraordinarily twisted! I loved it.

All The Places I've Ever Lived is a part teenage coming of age story, a murder mystery quedt and a time travelling at the seat of your pants journey - all rolled into one. It's genre busting, and I think that is one of the reasons that I devoured this book in only a few sittings.

The book centres around Barry Dyer, a fifteen-year-old living in Cumbria, during the 1970s. He plays guitar, wants to be a folk singer and is trying to find his identity, as all teenagers do. On the outside he is a normal boy, but he is harbouring a secret that only he knows. He wakes on the morning after an assault on local teenager, Philomena May, to find that his body is covered in small metal discs that only he can see.  From this moment on,  the book takes on a quirky and urban noir edge.

The plot is a complex one, in that we are the observers to two stories. One is in the present day of the novel, during the 1970s and focussed upon the search for Philomenas's attacker. The second is set in the year 2010 (remember this is also a time travelling tale), but the two stories, and two worlds, are linked by Pholomena, one girl who is real, the other a ghost.

Although this is a hugely fantastical story,  it is grounded in reality. Themes such as those of seeking justice, morality, finding your identity and purpose in life, are all entwined into the narrative. This is predominantly a story about a teenage boy, who is on the brink of adulthood and who wants to do the right thing. He wants to be the son that his parents are proud of, he wants to succeed in his music and he wants to find love.

I adored this book, every single inch of it. You simply have to go with it, trust the author in where he wishes to take you. I think that the story, for all of its other worldly and ghostly features, works because of the utterly believable characters. We believe in Barry, and because of this we can time travel with him and take part in his adventure and into the realm of adulthood.

All The Places I've Ever Lived is a refreshing read. It's funny at times, while at others it is deeply poignant. Don't be fooled by the time travelling/ghost/ murder mystery hook, into thinking that this is a light throw away read. Because it isn't. This book makes you think. It makes you think of how you interact with people, how you live your life and about what is truly important. It is absurd, surreal, yet spine chillingly real. I loved every page.

All The Places I've Ever Lived Is published on February 23 by Urbane Publications.

All The Places I've Ever Lived is available to buy from Amazon here.

David Gaffney comes from Cleator Moor in West Cumbria and now lives in Manchester. He is the author of Sawn-off Tales (2006), Aromabingo (2007), Never Never (2008), The Half-life of Songs (2010) and his latest collection of short stories, More Sawn-Off Tales ( 2013). He has also written Buildings Crying Out, a story using lost cat posters (Lancaster LitFest 2009); 23 Stops To Hull, a set of stories about every junction on the M62 (Humber Mouth Literature Festival 2009); Sawn-off Opera, a set of operas with composer Ailis Ni Riain (BBC Radio 3, RNCM, Liverpool Philharmonic and Tete a Tete festival London 2010); Destroy PowerPoint, stories in PowerPoint format for Edinburgh Festival 2009; The Poole Confessions, stories told in a mobile confessional box (Poole Literature Festival 2010); Station Stories, in which six writers linked to the audience with wireless headphones performed short stories in Manchester Piccadilly railway station (Manchester Literature Festival 2011); Boy You Turn Me, a sound installation (Birmingham Book Festival 2011); guerrilla writing project Errata Slips (Cornerhouse Manchester 2011), Preston 3twenty (2012-2032), a twenty-year arts and literature project, Men Who Like Women Who Smell of Their Jobs, (Manchester Literature Festival 2014) a visual art exhibition with painter Alison Erika Forde, and The Three Rooms In Valerie's Head, a graphic novel with illustrator Dan Berry (2015-2016) David has written articles for the Guardian, Sunday Times, Financial Times and Prospect magazine , was a judge for the 2015 Bridport prize and is currently a visiting fellow with the University of Manchester.