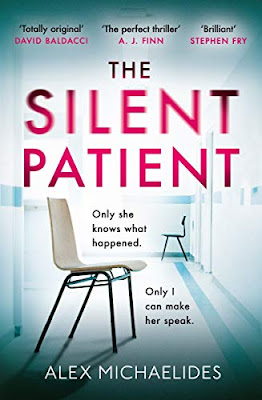 About The Silent Patient

Alicia Berenson writes a diary as a release, an outlet - and to prove to her beloved husband that everything is fine. She can't bear the thought of worrying Gabriel, or causing him pain.

Until, late one evening, Alicia shoots Gabriel five times and then never speaks another word.

Forensic psychotherapist Theo Faber is convinced he can successfully treat Alicia, where all others have failed. Obsessed with investigating her crime, his discoveries suggest Alicia's silence goes far deeper than he first thought.

And if she speaks, would he want to hear the truth?


My review of The Silent Patient 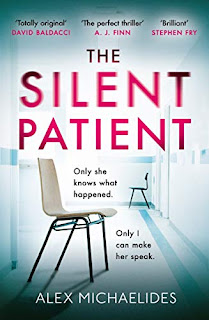 The Silent Patient was an energising, shocking and addictive read. I kept telling myself, just five more minutes, but this inevitably stretched out to an hour. It's that good. I couldn't put it down.

This book works on so many different levels. It's a chilling thriller of a read, in that we do not know why Alicia shot her husband five times. This in itself is both shocking and disturbing, but as we read Alicia's diary and Theo's thoughts, we learn even more disturbing facts. I was on the edge of my seat as I was drawn deeper into this deeply disturbing tale.

We also have two engaging central characters. Alicia is the silent patient, but we learn about her from her diary entries and what is said about her by the doctors and other patients in the secure psychiatric hospital. Although her actions are unthinkable and barbaric, I felt great sympathy towards Alicia. I knew that I should not feel this way, as the woman we read of In the diary entries is a juxtaposition to the woman who killed her husband. I too, wanted to solve the mystery.

We then have Alex, the psychotherapist,
and it was him that I found most interesting. He becomes obsessed with the case and making Alicia speak. He is convinced that he is the only one who can make her talk and this is his driving force. Here is a man with his own secrets and troubled past which influence his decisions today I found him most fascinating and the scenes between him and Alicia simply fizzed with tension and unease on the page. I found myself holding my breath.

This is one disturbing and gripping read. Why did Alicia kill her husband? Did she kill her husband? Why will she not speak? I had so many theories that  came and went as I progressed through the book. And I was shocked as to what had really happened. The ending blew me away.

The Silent Patient is a clever; unique and disturbing thriller. Believe the hype. This book is already huge.

With thanks to the publisher and NetGalley for providing a review copy.

The Silent Patient is publushed by Orion on 7th Feb.