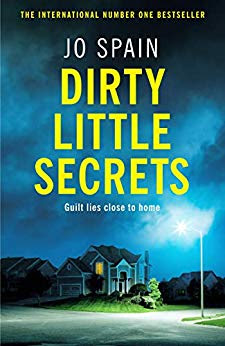 In the exclusive gated community of Withered Vale, people's lives appear as perfect as their beautifully manicured lawns. Money, success, privilege - the residents have it all. Life is good.

Olive Collins' dead body has been rotting inside number four for the last three months. Her neighbours say they're shocked at the discovery but nobody thought to check on her when she vanished from sight.

The police start to ask questions and the seemingly flawless facade begins to crack. Because, when it comes to Olive's neighbours, it seems each of them has something to hide, something to lose and everything to gain from her death.

The new psychological thriller from the bestselling author of The Confession, perfect for fans of Liane Moriarty.

My review of Dirty Little Secrets 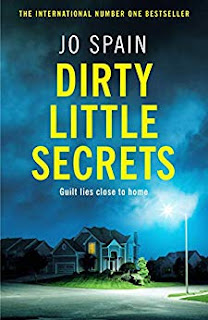 Oh my! When you pick up a book by Jo Spain you just know that you're in for a treat and Dirty Little Secrets is no exception. This psychological thriller kept me riveted from the opening pages with its disturbing, dark and sinister goings on.

Olive has been dead in her home for three months. That's the shocking truth at the heart of this story. In a gated community, where the neighbours all know each other, this is completely shocking. How was her death unnoticed for so long? This sets the tone for the entire story, that of feeling desperately sorry for this woman who lived and died alone.

We are then introduced to the neighbours in turn, all of whom have their own stories and secrets to share, as does Olive.

Emma and Frank are the two detectives who have been drafted in to solve the case, and I loved these two characters, especially Frank. I had a soft spot for him. They are the people asking the difficult questions. Was Olive's death a tragic accident or was she murdered? It's a psychological tiller and a murder mystery all rolled into one as you don't find out until the final pages what actually happened.

Along the way I had my potential suspects named, but my thoughts kept shifting as more secrets were unearthed. All of the neighbours had their own reasons for disliking Olive and therefore all  were  potential suspects.

Olive is a victim. But, although a victim and I knew I should have felt empathy towards her, I didn't particularly like her. The neighbours are also a colourful bunch with flaws and likeability, just like us all. I enjoyed reading about their secrets and what they really thought about their lonely neighbour.

Dirty Little Secrets is a hugely enjoyable book that  tells the truths about human nature and what it means to live in such close proximity to others. It explores the need for privacy, how we communicate and interact with our neighbours and that nobody, no matter what the circumstances, should have to die alone.

Jo Spain has simply gone and done it again. This was a book that I simply could not put down. Then once I had finished reading I found myself thinking  about Olive. Such an amazing book and a highly addictive read.

Dirty Little Secrets is published by Quercus on 7 Feb.