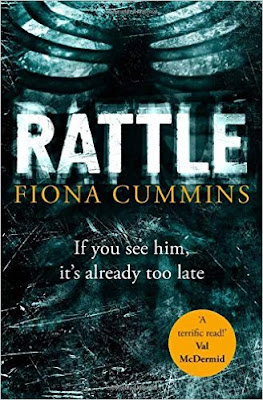 A serial killer to chill your bones

He has planned well. He leads two lives. In one he's just like anyone else. But in the other he is the caretaker of his family's macabre museum.

Now the time has come to add to his collection. He is ready to feed his obsession, and he is on the hunt.

Jakey Frith and Clara Foyle have something in common. They have what he needs.

What begins is a terrifying cat-and-mouse game between the sinister collector, Jakey's father and Etta Fitzroy, a troubled detective investigating a spate of abductions.

Set in London's Blackheath, Rattle by Fiona Cummins explores the seam of darkness that runs through us all; the struggle between light and shadow, redemption and revenge.

It is a glimpse into the mind of a sinister psychopath. And it's also a story about not giving up hope when it seems that all hope is already lost.


My Review of Rattle
Rattle by Fiona Cummins is a deliciously dark and compelling read that will stay with you for a very long time. This book gets under your skin and refuses to let go. I know it's  only January, but I already have this book pegged as one of my top reads of 2017. It's not an easy read, and I did find it hugely disturbing, but the idea that a psychopath could be living on your street, that this person could be someone that you see on a daily basis, well, it is truly shocking. It is this fact that I cannot shake off, and once you get to know the Bone Collector, you will never forget him.
This book is incredibly difficult to review, in terms of not giving the plot away. So I don't want to say any more than what is suggested on the book's blurb. This book is full of twists and turns that you just don't see coming, but for me, what I found most interesting, was the darkness that lurked in the pages, and which seeped into each and every character.
We have the parents, all of whom have their own problems and demons to face. But what they all have in common is a longing and drive to get their children back home safely. Nothing else matters. We then have the feisty detective, Etta Fitzroy, with her own demons to tackle. She is no stranger to this dark world, and what we see as we progress through the novel is a woman who will do anything to protect these two children. She is a complex character, who makes mistakes, but ultimately she is likeable and strives to do what all police officers do, get the bad guys.  Which then leads me on to the Bone Collector. Now, I have read many crime/thriller books, and I can honesty say that I have never come across a character such as this one. He is bone chillingly creepy. He leads two separate lives, one life as a psychopath, the other as a carer to his disabled wife, the passages between the two of them deeply touched me. It is obvious that he cares deeply for his wife. But then we have the psychopath, the man who likes to abduct children to show in a deeply disturbing macabre of a museum. It is just so very difficult to comprehend that this man is both a carer and a monster, but the hypothesis is so very real, and this is what is truly frightening.
As a mother, I also found this book incredibly difficult to read in places. Two children are abducted by the Bone Collector, and although not graphic in their depictions at all, what happens to them is still deeply harrowing. The two children, Jakey Frith and Clara Foyle are only infants and my heart broke for them, wishing for them to be found safely and unharmed.
I just want to convey how much I enjoyed this book. I have never read a book quite like it. It is poignant, original and deeply cruel, playing on your worst nightmares. The character of the Bone Collector will remain with me for a very long time.
Rattle is published by Macmillan on 26th January

You can find Rattle on Amazon here