He Said/She Said by Erin Kelly 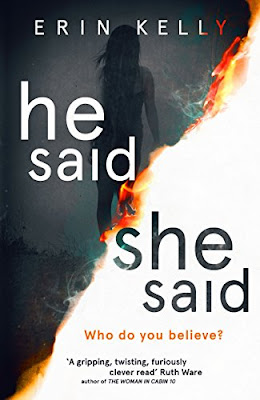 About He Said/She Said

You don't want to be left in the dark. Twisty, gripping and thought-provoking, HE SAID/SHE SAID is the suspense novel everyone is lining up to read and rave about.

'A tour de force - a gripping, twisting, furiously clever read that asks all the right questions and keeps you guessing until the very end.' Ruth Ware, author of The Woman in Cabin 10
'I'm calling it: THIS is the book I wish I'd written' Clare Mackintosh, author of I See You
In the hushed aftermath of a total eclipse, Laura witnesses a brutal attack.
She and her boyfriend Kit call the police, and in that moment, four lives change forever.
Fifteen years on, Laura and Kit live in fear.
And while Laura knows she was right to speak out, she also knows that you can never see the whole picture: something is always hidden... something she never could have guessed.

My Review of He Said/She Said

He Said/She Said is a fast paced, gripping and compulsive read. Once I began to read I could not put it down, I was hooked from the very beginning. If you love complex characterisations, twisted plots and an enjoyable story to boot, then you will love this book. I did!
The story we are told begins fifteen years previously, when Kit and Laura attend an 'eclipse festival' in Cornwall, on Lizard Point. Kit had travelled with his twin brother, Mac, along with Mac's girlfriend (and Laura's best friend), Ling. Laura had to attend a job interview and so traveled to meet them a few days later. They had funded the trip by manning a tea tent at the festival, selling the then, much drunk, spiced chai tea.
It is from this point onwards that the loves of Kit and Laura changes forever. After viewing the eclipse, Laura stumbles upon a purse that is in the grass, and on her search to find the recipient, stumbles upon a rape. We later learn that the woman's name is Beth and the man accused of rape is Jamie. The four characters lives from that moment on become entwined, when Kit and Laura are asked to provide witness statements and to then stand as witnesses during the rape trial. I won't say any more about what happens, but this is the beginning of their new lives.
This book is a dark read, and a thought provoking one, especially around the issue of rape and that of consent. It is very obvious that he author has done lots of research and provides us with an utterly plausible storyline with regards to the violation of rape victims when in a court of law, and the fact that it is very often their word against the accused. Very often it is the victim who is forced to plead her innocence, with sexual habits, past sexual partners, and state of mind all coming into play.
Kit and Laura are captivating characters, each telling their own story via alternating chapters in the book. In doing so, we get a fully rounded account of what has happened during the past fifteen years, helping us to fill the gaps and shed light on the present day. However, it is vary difficult to know who is telling the truth, and it is only during the last few pages of the book that we fully understand what has happened between them. To say that I was shocked, would be a huge understatement. At first I thought that the title of the book referred to the version of events as presented by Jamie and Beth, but in fact I now understand that the book is about Kit and Laura, and their relationship, and that there are always two sides to every story.
This book very much centres around the eclipse, with Kit and Laura, being eclipse chasers. I thought that this would put me off, but in fact it did the opposite. I found the information about the eclipse fascinating, and just heaped to add a further layer to the story. All of the important events that happen to Kit and Laura seem to revolve around the eclipse, so it is a part of them, part of who they are as a couple.
Erin Kelly is a very talented writer. By the end of the book In felt like I  knew Beth, Kit and Laura, that I knew their souls, what made them tick and what had shaped them, and this is very difficult to achieve. It is these complex characters that make the book a gripping and fascinating read. In truth, I did not like any of them, but that didn't matter, I didn't need to like them, merely understand them, and this was achieved by the end of the book.
He Said/She Said is a thoroughly enjoyable read, and a book that I highly recommend.

With thanks to the publisher and NetGalley for an Advanced Reader Copy.
He Said/She Said is published by Hodder and Stoughton on April 20th.
The book is available to pre order from Amazon here.