Dancers in the Wind by Anne Coates 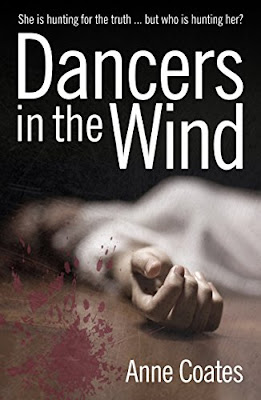 About Dancers in the Wind

Freelance journalist and single mother Hannah Weybridge is commissioned by a national newspaper to write an investigative article on the notorious red light district in Kings Cross. There she meets prostitute Princess, and police inspector in the vice squad, Tom Jordan. When Princess later arrives on her doorstep beaten up so badly she is barely recognisable, Hannah has to make some tough decisions and is drawn ever deeper into the world of deceit and violence.

Three sex workers are murdered, their deaths covered up in a media blackout, and Hannah herself is under threat. As she comes to realise that the taste for vice reaches into the higher echelons of the great and the good, Hannah realises she must do everything in her power to expose the truth .... and stay alive.


My review of Dancers in the Wind


Dancers in the Wind is a highly innovative and compelling novel from Anne Coats. This book is a mixture of crime thriller slash investigative journalism, with even a dash of romance, that is both gritty and realistic. I loved it.

The novel is set in 1993, and we firstly meet Hannah Weybridge, a freelance journalist and single mother to a young baby, as she is on her way to Kings Cross to interview Princess, a young prostitute, for a national magazine. While interviewing her, she begins to learn of what reality is really like for Princess and for the other women working on the street, and has her eyes well a truly opened. Something changes within Hannah, and her life is soon to be entwined with Princess's and the seedier side of life on the London streets.

Hannah is an incredibly likeable character. She is a mother, and I instantly warned to this nurturing side of her nature. Her maternal instinct most definitely kicked in when she met Princess. However, she also has a steely side, a perceptiveness about her and a determination to find the truth, no matter the cost, in her quest to find out who is responsible for the recent murders of several prostitutes within the Kings Cross area.

Princess for me was the most interesting character, barely a woman, her life had been ruined from a very young age. The way in which her descriptions of life on the street were described to me as a reader, were very well written, they appeared very much as fact, and it was apparent to me that the author had done much research upon the subject.

What completely gripped me and made me gasp for breath, was when Princess is brutally attacked and left for dead by one of her punters. In her hour of need she turns to Hannah, literally turning up on her doorstep in the middle of the night, bloodied and broken. The description of Princess in this state, and of how Hannah cares for her, had me in tears.

We also meet DI Tom Jordan, a police Inspector for the vice squad. He is interviewed by Hannah with regards to his role in the vice squad for her article, but just as Princess becomes part of her life, so does Tom. Here is a man who is handsome but guarded. He seems genuine, in how he treats Hannah and in what he says about keeping the prostitutes safe on the street, but can Hannah trust him? This is the big question in this book, issues of trust when linked to authority. While reading I very quickly made my mind up about him, although I was kept in the dark until the very end. What I also loved was the chemistry between them on the page. For me, they made the perfect couple.

This book is not an easy read, but then it is not meant to be, it is a book about raising awareness of these vulnerable women, that they are someone's daughter, someone's mother. They are humanised, they are made to count, their lives matter. This is a crime thriller, but one that asks many questions about how these vulnerable women are treated by society and those who are in a position of power to protect them.

I highly recommend Dancers in the Wind, it is a deeply moving book, and I am very much looking forward to book two in the series which is to be published soon.

Dancers in the Wind, published by Urbane Publications on October 13, can be found on Amazon here.


I love reading and the type of fiction I write is what I like to read. So my very short stories are often tales with a twist and the longer ones explore relationships – often within a family. Most of these stories were published first in Bella, Candis and other magazines and now appear in two collections published by Endeavour Press.

My debut thriller, "Dancers in the Wind", was published by Urbane Publications in October 2016. This book is a result of an interview I did for a national newspaper and afterwards I thought "What if..." and so Hannah Weybridge came into existence and she continues her life in "Death's Silent Judgement" to be published in May 2017 again by Urbane Publications. I am currently working on the third book in the series. You can find out more about my writing at www.annecoatesauthor.com

Journalism has led me into diverse fields from human interest stories to health and beauty to travel and parenting and so just over seven years ago I founded the website: www.parentingwithouttears.com writing about what inspires (or upsets) me and hosting articles and reviews by other writers and parents. This led to two parenting guides again published by Endeavour Press.

Before that I had written three books (two for Wayland) including "Your Only Child" (Bloomsbury) plus two books about applying to and surviving university published by Need to Know.

I live in SE London with three demanding cats and enjoy going to the theatre and cinema and socialising with friends. You can find out more about the parenting website on twitter @ParentingWT or more about what I am up to @Anne_Coates1