The Speech by Andrew Smith #bookreview 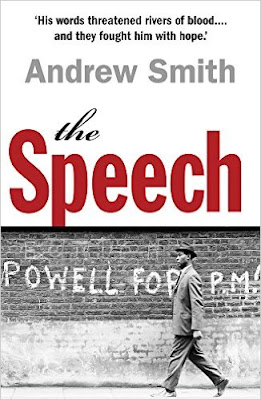 
His words threatened rivers of blood...and they fought him with hope... April 20th, 1968: Enoch Powell, MP for Wolverhampton South West, gives a speech that shakes a community and Britain to its very core. Words that provoke, that divide ... that profoundly affect the lives of those they touch. Mrs. Georgina Verington-Delaunay is an administrator working in the Conservative riding office of Enoch Powell. Frank and Christine are art students inadvertently caught in an undercurrent of intolerance. Nelson and his Aunt Irene are Jamaican immigrants striving to make a life for themselves in a turbulent atmosphere. In the shadow of Powell's speech, a violent crime brings these disparate characters together as they struggle to find their places in the swiftly changing society of 1960s Britain. Set against a background of subversive music, radical fashions, and profound change in moral values, they attempt against all odds to bring a fair conclusion to an unjust investigation. As they work together against murky elements of self-interest and bigotry, they're forced to confront their own consciences and prejudices, and the reader is taken on a compelling journey into the beating heart of a community in turmoil.


My review of The Speech

I'll start this review by saying that The Speech is not my usual reading genre, that of politically themed stories, but due to what is happening in the world at the moment, and the fact that this book was recommended to me, I thought I would give it a try, and I am so very glad that I did.

The Speech explores the life of Enoch Powell while living inWolverhampton during the 1960s, a decade before my time. The book is a wonderful mix of fiction and reality, which beautifully blends together to  create this entertaining, yet educational and informative read.

Although, The Speech, is predominantly about Enoch Powell, it is really a story of three tales. We have the story of Nelson, who lives with his Aunt, who is wrongly accused of murder. I liked this character immensely, and felt great sadness for what he had to go through in order to protest his innocence. We also meet Frank, a photography student who is young and naïve and who 'helps' Enoch in his conspiracy to frame Nelson. To be honest, it was Nelson's plight and story that most intrigued me, and I found what happened to him just as relevant today, with current issues of Brexit and immigration dominating the headlines. We then also have the ten day time fame that the novel is set within, leading up to the infamous Rivers of Blood Speech and the novel's ultimate conclusion. This was a very clever narrative device, as I found myself whizzing through the pages in my urge to find out what happened to all of the characters. I needed to know!

This novel so eloquently highlights the issues of racism, bigotry and hatred. It is an emotional and insightful read, that grips you throughout Enoch Powell's political journey and subsequent fall from grace. Whether you like Powell or not, is, I feel, irrelevant, as what is of importance are the issues within the book, those of racism and being 'different' and the individual stories that unfold. So, do not be put off by the political angle in this book, or the fact that it is based upon a real life politician. While reading, I found it difficult to separate what was fact and what was fiction, but for me this didn't matter. It is not a biography, it is a work of fiction based upon fact. It is an enjoyable and immensely thought provoking read.

The Speech is published by Urbane Publications and is available to buy from Amazon here.

With thanks to the publisher and NetGalley for a review copy.


Andrew Smith’s first novel, Edith’s War, won a gold medal at the Independent Publishers’ Book Awards, U.S.A. His short fiction has been included in the Journey Prize Anthology and shortlisted for the CBC Literary Awards. His travel writing has garnered a Western Magazine Award. He has published two non-fiction books: Strangers in the Garden, the secret lives of our favorite flowers and Highlights, an illustrated history of cannabis (co-author). Smith’s next novel, The Speech, has been published in October, 2016 by Urbane Publications, U.K.