I had heard so many good things abut this book, so when I was browsing the shelves in my local library and spotted it, I knew that I had to read it. I devoured this beautifully written book quickly and thoroughly enjoyed it.

Honor’s secret threatens to rob her of the independence she’s guarded ferociously for eighty years.

Lydia’s could bring her love - or the loss of everything that matters to her.

Grandmother, mother and daughter – three women whose lives are falling apart. But one summer’s day, a single dramatic moment will force their secrets into the open.

Can they save each other from falling? 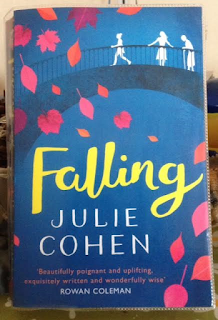 This was such a beautiful book to read. The emphasis was very much upon the relationship between women, how women support each other and what different generations of women can teach each other. All of the three main characters, Honor, Jo and Lydia, are likeable, strong and feisty women who know their own mind. Each have their own secret (which I won't give away) and it is through the telling of their individual stories and unique voices, that you realise what each of their secrets is doing to them. The strong message within the book is that it is only by confiding and trusting in others that you can truly adapt and enjoy life.

Honor is the grandmother, and Jo's mother-in-law, and at first I admit that I did not like her much. But as her story developed, and I began to find out who she truly was, she gradually grew on me and by the end she was by far my most favourite of the three. Jo I found to be the weakest link, as at times I wanted her to wake up and see what was going on around her. But I empathised with her as a busy mum of two pre-schoolers, and then having to deal with a teenage daughter. The scene where she travels by bus with the two younger children had me in stitches and was vey similar to when I used to travel by bus with my two boys in their younger days. I still carry tubs of cheerio's with me, just in case. But throughout the story we soon realise that Jo is tackling her own demons and is simply doing the best that she can.

Lydia I really admired. A teenage girl coming to terms with her newly adult self and all of the associated life changes that are to take place. Her voice, for me, was the strongest. I could hear her talking to me through the pages. She was heartfelt and authentic; beautifully captured in that moment between childhood and adulthood.

I love this book. I love the fact that the entre narrative discuses how strong women are and that they are even stronger when they support each other. The bonds between grandmother, mother and daughter are also fully explored, as is the delicate relationship between mother and daughter-in-law.

This book really was like a breath of fresh air and will make you evaluate the relationships that you have with the important women in your own life.


Falling was published on 28th July by Black Swan
Posted by jo at 07:18