No Turning Back byTracy Buchanan

While browsing the shelves in my local Sainsbury's I spotted this beautiful book cover, and thought that I recognised it. I did! A few days previously I had read a post about it on twitter, and at the thought that I really must read this book! So of course I popped it into the shopping trolley.

You’d kill to protect your child – wouldn’t you?
FROM THE #1 BESTSELLING AUTHOR OF My Sister’s Secret
When radio presenter Anna Graves and her baby are attacked on the beach by a crazed teenager, Anna reacts instinctively to protect her daughter.

But her life falls apart when the schoolboy dies from his injuries. The police believe Anna’s story, until the autopsy results reveal something more sinister.
A frenzied media attack sends Anna into a spiral of self-doubt. Her precarious mental state is further threatened when she receives a chilling message from someone claiming to be the ‘Ophelia Killer’, responsible for a series of murders twenty years ago.

Is Anna as innocent as she claims? And is murder forgivable, if committed to save your child’s life…?

My Review of No Turning Back 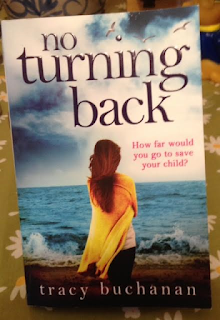 At the beginning we are quickly introduced to Anna and her daily morning radio show. I instantly liked her, and this I felt was very important. To really enjoy the book and to empathise with Anna, you have to like her.

The crux of the book, for me, was that as a mother I would do anything to save my child, and this means ANYTHING. I have two young sons and throughout the book I kept placing myself in Anna's position and wondering if I would have done the same thing to protect my child. Instinctively I told myself yes, of course I would have done the same as she did. But underneath is a rumbling current of uncertainty. It is a hypothetical question... the correct answer is yes, but in reality, who knows? And this is the ethical dilemma which the author so eloquently explores.

Throughout the book I agreed with most of the decisions that Anna made. I did question some of the risks that she took, thinking that at times she had completely overstepped the mark, but I understood why she did what she did, and for that I could forgive her mistakes.

Although this book is dubbed as a thriller, I actually found that the heart of the book was about the relationships between women. The mother and daughter bond, the granddaughter and grandmother bond. These family dynamics were beautifully explored and portrayed, while not being over sentimental.

The book did live up to its theme of being a suspenseful thriller, as throughout we are left hanging as to who has been committing these awful crimes, past and present. Hand on heart I had the suspect completely wrong. I was gripped until the very last page.

This is a thriller with lots of heart and a truly enjoyable read.

About the Author (taken from Amazon)

Tracy Buchanan lives in Buckinghamshire with her husband, their little girl and their one-eyed Jack Russell. Tracy travelled extensively while working as a travel magazine editor, and has always been drawn to the sea after spending her childhood holidays on the south coast visiting family, a fascination that inspires her writing. She now dedicates her time to writing and procrastinating on Twitter.