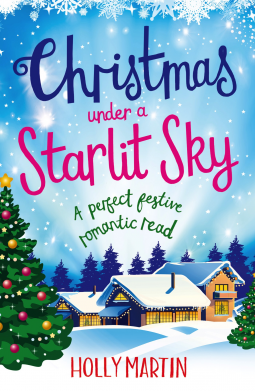 Christmas Under a Starlit Sky

Step inside a beautiful winter wonderland where love, laughter and cosy nights by the fire will make this Christmas one to remember.
Neve Whitaker loves managing the Stardust Lake hotel. She gets to work alongside her wonderful family and she’s spending Christmas on the most enchanting, snow-covered island in Scotland. So why is her heart so heavy this festive season?
It might have something to do with the gorgeous actor Oakley Rey, the man she finished with before he left for California and the man she loves more than anything. With Oakley’s career in Hollywood soaring, Neve is convinced she’d only hold him back. She had to end it with him – at least that’s what she keeps telling herself.
But now she has a secret she’s struggling to keep, and when Oakley arrives on Juniper Island determined to win her back, Neve is thrown off balance. Will Neve’s fear of having her heart broken again push Oakley away for good, or is it time for her to take a leap of faith?
Get swept away by this deliciously sweet and heartwarming tale, and spend an unforgettable Christmas on Juniper Island.


My review of Christmas Under a Starlit Sky
Oh where do I start with this book, other than to say that I loved it? It is such a cosy, warm and fluffy read that makes you feel all gooey inside and that anything in life is possible. This really is the perfect feel good book. There is nothing about this book that I didn't like.

Firstly we have Neve and Oakley. In the previous book Neve left Oakley as she believed that their two lives were not compatible, mainly due to the fact that he was a rising Hollywood star. However, at the beginning of this book, Oakley returns and he wants Neve back. Now Oakley is a handsome and dashing character who you just can't help but love. I  really enjoyed reading about this couple and how they fizzled off each other. Throughout the book it was plainly obvious to everyone that they were meant for each other, but would fate allow this because of a secret that Neve was keeping from him? That was the real question.
For me, the real surprise in the book and whom I loved the most, were the supporting characters of Dan and Ivy, and for me they stole the show. They too have their own secrets to keep.  Dan who has been brought in to help Neve manage the Stardust Lake hotel (I just love the name) over the Christmas break is simply adorable and from the very first moment that I met him, I couldn't help but love him. Ivy, who is a painter and who runs a local shop, meets Dan quite by surprise one day and their quite unexpectedly their journey begins. Now the chemistry between these two characters and how they interacted with each other was lovely to see unfurled on the page.

This book features many colourful and memorable characters whom you meet along the way. They all help to create a sense of community in the small snow covered island. That is what I truly loved about this book, that everyone looked out for each other and cared for each other. This type of close knit community is so very hard to find in the real world.
So, yes, I adored this story. Grab a crocheted blanket and a mug of hot chocolate when you curl up with this book. It is the perfect romantic Christmas read.
Christmas Under a Starlit Sky is published October 19th by Bookouture and can be bought via Amazon here
About Holly Martin
Holly lives in sunny Devon in a little white cottage by the sea. She studied media at university which led to a very glitzy career as a hotel receptionist followed by a even more glamorous two years working in a bank. The moment that one of her colleagues received the much coveted carriage clock for fifteen years’ service was the moment when she knew she had to escape. She quit her job and returned to university to train to be a teacher. Three years later, she emerged wide eyed and terrified that she now had responsibility for the development of thirty young minds. She taught for four years and then escaped the classroom to teach history workshops, dressing up as a Viking one day and an Egyptian High Priestess the next. But the long journeys around the UK and many hours sat on the M25 gave her a lot of time to plan out her stories and she now writes full time, doing what she loves.