The Killing Game by J.S. Carol 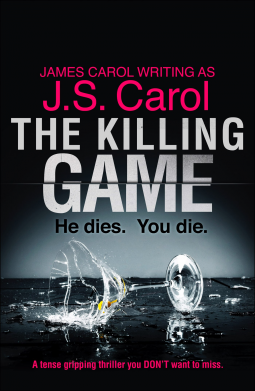 Imagine you are having lunch at an exclusive restaurant, filled with Hollywood’s hottest stars.
And a masked gunman walks in and takes everyone hostage.

You must bargain for your life against a twisted individual who knows everything about you.
He also has a bomb set to detonate if his heart rate changes.

If he dies. You die.

You have four hours to stay alive.

What would you do?

A heart-stopping thriller with plenty of twists and turns that will keep you on the edge of your seat, for fans of Peter Swanson, Harlan Coben and Linwood Barclay.
My Review of The Killing Game
Wow! Just, wow! That about sums this book up. It is a fantastic, heart stopping, adrenaline rush of a read! As soon as I read the book description and all of the well deserved hype that surrounds this book, I knew that I had to read it.

The story is set in one of LA's most exclusive restaurants, Alfie's, where all of the top movie producers, record execs and actors go to hang out. Nestled amongst them is Jodie Johnson 'JJ', one of the top PR people in the business. It is during the midday meal that a bomber walks in. He is masked and has a vest packed with explosives and a gun. From this moment on the book is non stop action that just doesn't let up. I could hardly breathe it was that fast paced. Along the way we meet the various inhabitants of the restaurant, and see the other side of the story as told from the media hounds who are following the story.

For me every single character was important but each was very firmly situated in that grey area, between being loved and loathed. And this is were the author is very clever. We are left to draw our own conclusions, based on the evidence that is presented to us. We question our own morality, the need for power, fame and the fact that at the end of the day, we are all just the same.

Now, this book is incredibly violent, there are no two ways about it. So if you are a little squeamish then this book is probably not for you. But the violent nature of the book helps us to explore human nature when it is at its most base. I honestly felt every emotion that the characters were feeling,  while being held in that restaurant. These feelings also stayed with me long after I had finished reading the book.

I don't want to give anything away in terms of plot, but there are just so many twists and turns that you really can't imagine how the book will end. It's that good. I was gripped until the very last page.
Many thanks to NetGalley and the publisher, Bookouture, for an ARC in exchange for an honest  review. The Killing Game is published on October 13th.

James Carol is the bestselling author of BROKEN DOLLS, the first in a series featuring former FBI profiler Jefferson Winter. The novel was released in the UK in January 2014 to rave reviews and reached number 1 on the Amazon fiction and thriller charts. In addition James is writing a series of eBooks set during Winter's FBI days. PRESUMED GUILTY is the first of these. Under the pseudonym J.S. Carol, he has also written THE KILLING GAME.

‘BROKEN DOLLS has it all. Horrifying evil, a brilliant, conflicted profiler and cracking pace and tension. I read it in what seemed like two trembling gulps.’ (Stephen Fry)

‘Strikingly well-researched and written with a real swagger, it leaves you desperate for more.’ (The Mail)

Praise for WATCH ME:
'James Carol is a non-American who has mastered the idiom of the US thriller … Carol is no [Lee] Child clone, and carves out his own menacing canvas with real panache. (Barry Foreshaw, The Independent)

James was born in Scotland and moved to England in the early-eighties. At various times he has worked as a guitarist, sound engineer, guitar tutor, journalist, and a horse riding instructor. When he's not writing, James spends his time training horses and riders. An accomplished guitarist, he relaxes by writing and recording music. He lives in Hertfordshire with his wife and two children.
The Killing Game is available to buy from Amazon here
Posted by jo at 06:00