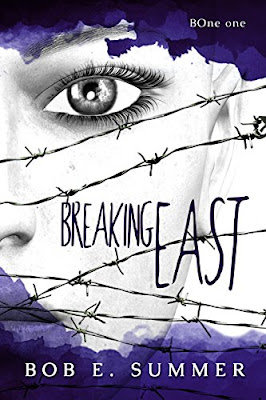 My dad used to love telling the story about how I kicked my way into the world ten weeks early. He swore I screamed so loud the midwife almost dropped me on my head. ‘Holy devil on a pushbike,’ she said. ‘Just listen to that attitude already.’

In a divided Britain, seventeen-year-old Atty accepts her first proper job as a freedom fighter—all she has to do is spy on two abandoned kids. It should be a doddle in the park, but things turn messy and she gets tangled in lies, trapped on the wrong side of the border and isolated from everything she knows. And if dealing with corrupt agents, missing children and dead bodies isn’t enough, she has two lads competing for her attention, tweaking at her hormones until she can’t think straight. But if she doesn’t figure out who she can trust soon, the future she's always dreamt of will be lost.

Breaking East is the first book in the Bone trilogy—a coming-of-age, British dystopian, packed with action and fraught with the trouble called boys.

My Review of Breaking East

Breaking East is a YA dystopian novel, but quite frankly I think that to pigeonhole this book into such tight genres does not do it justice. I really dislike the labelling of books for this very reason. Breaking East is a dystopian novel that blends the YA genre to create a totally different type of book. This makes the book very different to your average YA novel. It also has a complex narrative, tackles serious issues such as poverty and depression and features an incredibly strong first person narrator in the voice of Atty.

Let me begin by saying that I loved this book. Much of my love for this book is based upon the strong female lead that is Atty. A 17-year-old who surprisingly is not annoying like a lot of teenage narration can be. I warmed to her instantly. She is feisty, strong, funny and witty; but does not come across as being too harsh as to be unlikeable. She also has her faults, as we all do, and is not ashamed of telling it as it is. Bob E Summer has managed to create a likeable, female narrator who tells beautifully the teenage angst of growing up in a deprived community with no family and the need to survive as best you can. While reading the book I wanted to have a cosy chat with her while drinking a hot cup of Blue juice.

Another interesting character in the book is that of Stuart, who is the polar opposite of Atty and is one of the "two lads competing for her affections". He comes from a privileged background and lives in The Burrows, which is the complete opposite to where Atty lives, and has connections, unlike Atty. I loved his character because he was not your stereotypically rich, spoilt boy. He has an inner depth and a fragality about him that makes me like him even more. He is also a gentleman, so what's not to like? You cannot help but fall in love with him. I really enjoyed reading the banter between Atty and Stuart, and the way in which the two connected over the course of the book. What I would have loved even more though was to hear his thoughts and feelings about Atty. As a character he really intrigued me and I would have loved to have heard those inner thoughts of his. Another character who I would have liked to have known more about was Joe. As Atty's guardian, he came across as a kind man with a rough exterior, but I would have loved the chance to see what was underneath.

Breaking East is an incredibly well written and fast paced novel that kept me guessing right up to the very end. The novel is very much a narrative for today's Broken Britain. This is a superb debut novel and I cannot wait to read Book 2 in the series.

Bob writes young adult fiction from a secret room in an ordinary house. She eats a lot of crisps and naps a lot.

Breaking East is available to buy from Amazon here
Posted by jo at 06:00