Single by Christmas by Rosa Temple 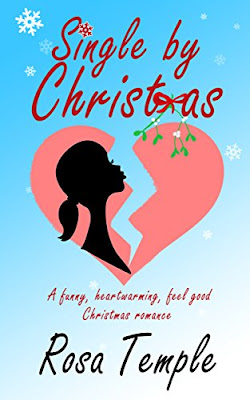 Alex and Charlie are together for 11 blissful months until Alex goes out of town and does something she will later regret. Was she drunk? You bet. Does she want Charlie to know? Well what do you think?

With the couple about to spend their first Christmas together will Charlie be the forgiving kind or will Alex be Single by Christmas?

This is a feel good, Christmas novel with very few mince pies, not much snow and absolutely no mistletoe – just a couple of best friends, a sociopathic nemesis and a lot of drinking.

My review of Single by Christmas

Single by Christmas begins on Christmas Eve, with Alex Marshall sitting outside a church waiting for her boyfriend Charlie. I loved the opening of this book. It made me winder why she was sitting alone and what would happen next. The real story begins on the first day of December, a month before, with us following Alex through all of December until we come full circle to where she is sat on the bench outside the church.

I really enjoyed this book, although Alex frustrated me, and at times annoyed me. She was not an easy character to like, but it was through her faults that I began to understand her, and ultimately begin to like her.

The story goes that Alex has been dating her scientist boyfriend, Charlie (who I fell in love with instantly) for eleven months. They met and started dating on New Year's Eve. This in itself is the perfect romantic perquisite to any romantic story. However, it is after she makes a trip to Scotland, that is shrouded in secrecy, that her life begins to unravel around her and begins to lose the love of her life. Did I feel sorry for her at this point in the book? Sadly not. I firmly believed that she had brought on all of her troubles by herself, most of which were fueled in a drunken haze. But as the story progressed, my understanding for her behaviour grew and, I began to emphasise with her and then simply wanted her to be happy.

What makes this book so funny though is the number of misunderstanding that take place. In fact the entire book is built upon miscommunication and misunderstandings, as is so much of life. Nobody's life is perfect or runs smoothly, and we are reminded of this while reading Alex's exploits. I think that is why I liked this book so much. It is not your typical warm and fuzzy Christmas read, as it tells a much deeper and raw kind of story - but one that will make you laugh and feel good about life.

Rosa Temple has a very distinctive writing style that is fresh, fest paced and witty. If you want to read a Christmas romantic comedy that is a little bit different - then this is the one for you. You won't be disappointed.


Single by Christmas is available to buy from  Amazon here

Rosa Temple began writing romantic comedy and chick lit novellas, short stories and books because of her passion for what she calls the 'early chick lit films', like: Sabrina, Barefoot In the Park and Breakfast at Tiffany's. She honed her skills as a ghostwriter, gaining experience writing romance novellas and book series, with sweet themes as well as steamy novels for adult readers.

She now specialises in contemporary romance but prefers to write chick-lit and romantic comedies.
So far, Rosa has published romantic comedy novella, Sleeping With Your Best Friend and the full length novel, Natalie's Getting Married, is published on 14th March 2016.

Rosa Temple is a Londoner and is married with two sons. She reads a wide range of Women’s Fiction and all its sub genres. She is a reluctant keep fit fanatic and doer of housework and insists that writing keeps her away from such strenuous tasks. She spends her days creating characters and storylines while drinking herbal tea and eating chocolate biscuits.