My Sister by Michelle Adams #bookreview 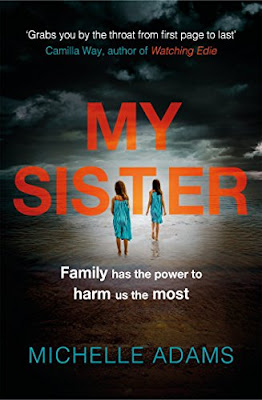 
My name is Irini. I was given away.

My name is Elle. I was kept.

All her life Irini thought she was given away because her family didn't want her. What if the truth is something worse?

One family bound by a harrowing secret

My review of My Sister

My Sister is a dark, disturbing and uncomfortable read that I enjoyed immensely. The story is told from Irini's point of view, the stater who was given away, and it is through her eyes that we learn the truth behind what happened... and why.

So, this story is about a family which is divided, that was torn apart when Irini was given away at the age of three. Irini has very few memories about this time in her life, and even now as a grown woman she has no idea why her parents made the decision for Irini to live with her aunt, instead of them.

The novel begins when Irini receives a phone call from her estranged sister, Elle, the sister whom her parents chose to keep. From this beginning, this one phone call, I had a slow burning sense of foreboding, that something really bad was going to happen. This book is a slow burner, and deliberately done so to give the book a creepy and unsettling feeling. Although described as a psychological thriller, for me the real thrill of the book was in the slow understanding of what was happening, in he understanding of the characters and in the realisation that their relationship was toxic.

My Sister is so very hard to review without giving the plot away. It is so intricately layered, going backwards and forwards in time, allowing us to glimpse both Irini and Elle in the past and present, which helps to shed light on who they are and why they have such a destructive relationship. Some of the events that take place in the past are truly shocking, but once told, made me realise the complexity and importance of their relationship. So, instead I want to write about how this book made me feel, the way in which the characters made me feel and interacted with each other. The main emphasis is obviously the relationship between Irinii and Elle, and from the start I had the feeling that they were best kept apart. Elle was most obviously a live wire, someone who was hard to contain, and I didn't like her, although I could empathise with her. I also felt slightly the same way towards Irini. Although the protagonist of the story, she was a character who was incredibly hard to like. To be honest, it took me until the very end to get what she was all about, but I actually think that this was the point. That I had to grow to love her, in order to understand her. Having said all that, I did empathise with her, and the situations that she found herself in.

My Sister is not a light read, it is a book with so much depth and understanding about the relationship of sisters. The story is incredibly clever, and almost  a manipulative tale about the bond that sisters share. Even when they are forced to live apart, the bond is never truly broken. I really liked this refreshing spin on the subject of sisters, the clever narrative and the intricate descriptions of events taking place... and as for the ending. Well, it simply took my breath away.

My Sister is published by Headline. The kindle version published on 20 April 2017 is available to by from Amazon here. Paperback published 11 Jan, 2018.

With thanks to the publisher and Bookbridgr for a paperback review copy.


Michelle Adams grew up in the UK and now lives in Cyprus, where she works as a part-time scientist. She read her first Stephen King novel at the tender age of nine, and has been addicted to suspense fiction ever since. MY SISTER is her first novel.