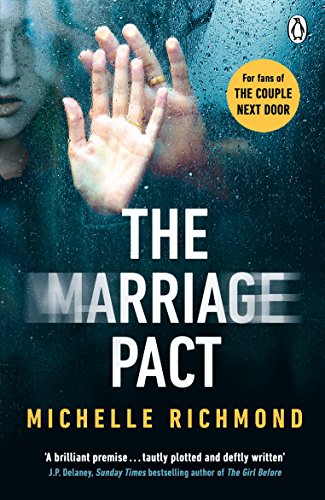 About The Marriage Pact


It's the perfect wedding gift.

Newlyweds Jake and Alice are offered membership of a club which promises members will never divorce.

Signing The Pact seems the ideal start to their marriage.

Until one of them breaks the rules.

Because The Pact is for life.

And its members will go to any lengths to ensure nobody leaves . . . 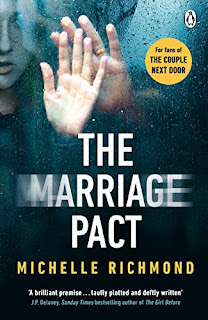 My review of The Wedding Pact

This is the first book that I have read by author,  Michelle Richmond, and I really enjoyed it. Is it a little far fetched? Well, yes, but by delving into the book and fully immersing myself in these characters lives, I was able to believe most of what happened. It is the relationship between Jake and Alice that won me over.

So, The Marriage Pact is basically the story of a young, newly married couple who join The Pact, a group for married people that aims to strengthen and prolong marriage. They join only weeks after their wedding and really have no idea about the rules and regulations of this group and what they are letting themselves in for. What happens next is an unsettling and creepy read that I did find hard to put down.

The crux of this novel is obviously about marriage, and that of a couple just starting marred life together. Jake is a therapist and Alice a lawyer. He had a happy home life growing up, but as a therapist, he is all too aware of what can go wrong in a marriage. Alice had a completely deferent upbringing to Jake's, and although she wants the marriage to work, she is scared of what the future holds. It is for these reasons, in the hope that the Pact can strengthen their chances of a long and happy marriage, that they blindly embark upon joining the Pact.

The Pact is a fascinating and moralistic read that has a dark undercurrent running throughout the veins of this book, that gradually build up into a sinister read. Who isn't fearful for their married future? When you marry in your early twenties, as I did, then you have absolutely no idea of what married life will be like in your early forties, or after that, who does? Marriage is the unknown, and this is what this novel very cleverly exploits. Marriage is a journey and is something that should only involve the couple, it has nothing to do with other people, as their opinions, belief systems and moral values should have no impact upon your choices as a couple This novel completely challenges this theory and offers an alternative viewpoint. What would happen if the rules of marriage was dictated by a group of people? It's an interesting theory and one that makes for a fascinating read.

The Marriage Pact published by Penguin on 27 July 2017 can be found on Amazon here.