Three Days and a Life by Pierre Lemaitre 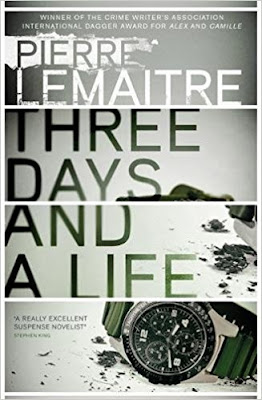 About Three Days ad a Life


Antoine is twelve years old. His parents are divorced and he lives with his mother in Beauval, a small, backwater town surrounded by forests, where everyone knows everyone's business, and nothing much ever happens. But in the last days of 1999, a series of events unfolds, culminating in the shocking vanishing without trace of a young child. The adults of the town are at a loss to explain the disappearance, but for Antoine, it all begins with the violent death of his neighbour's dog. From that one brutal act, his fate and the fate of his neighbour's six year old son are bound forever.

In the years following Rémi's disappearance, Antoine wrestles with the role his actions played. As a seemingly inescapable net begins to tighten, breaking free from the suffocating environs of Beauval becomes a gnawing obsession. But how far does he have to run, and how long will it take before his past catches up with him again?

My review of Three Days and a Life

Oh this book, I still can't get this book out of my head. It is one of those books that stays with you long after you have read the final page. It's taken me a while to sum up my thoughts, so that I can try and write my review. Three Days and a Life is incredibly hard to review in terms of plot, so I am not going to talk about the plot, instead I'll focus upon the way in which the book has been written and the beautiful imagery conjured up in the small French village of Beauval. I'll also add that I completely fell in love with this book.

Three Days and a Life is written from the third person point of view and is very easy to follow. The novel begins in 1999, just before Christmas when little Rémi disappears from the village, shortly after the violent death of his family's dog. We follow the inhabitants of the town, including Anotne and his mother, Madame Courtin, as they begin to search for the little boy. Alter several days, the time then shifts to 2015, and once again we follow Antoine. The narrative flows beautifully, and the author creates a sense of tension and urgency to his writing, with an unsettling undercurrent. I couldn't put the book down.
﻿
The remote village of Beauval is skilfully brought to life on the page, as well as its inhabitants. I could clearly picture the row of houses, the smell of the woods and the way that life must have been like for the people living there.

Understanding Beauval, is pivotal to understanding the complexity of the characters and the reasons in which they act. It is a close community, deeply affected by the disappearance of little Remi, and the village is never quite the same. I think that the reason that this book touched me so deeply, is that it is about how a little boy disappears, and the effect upon his family and the wider community. The beginning of the book I found very difficult to read, as some of the details are quite disturbing.

Pierre Lemaitre is a gifted storyteller of cutting edge thrillers that are also thought provoking. I cared aboiut these characters, even though I never liked Antoine. The fact trhat I didn't like him simply didn't matter, I still found him hugely readable and complex. This is a gripping tale of morality, of growing up and of dealing with the chances and decsions that you make in life. It left me breathless. My thoughts kept drifting back to this novel, days after I had finished reradong it. It is a disturbing read, but a compelling one that challenges our moral compass.

With thanks to the publisher,MacLehose Press, and Bookbridgr for a paperback proof copy.

Three Days and a Life is published by MacLehose Press on 13 July 2017 and is available to preorder on Amazon here.