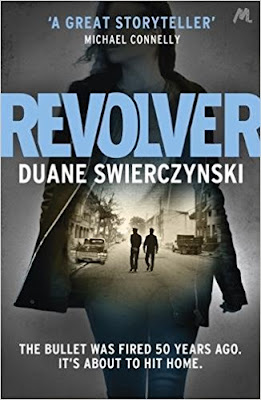 
Philadelphia 1965: Two street cops - one black, one white - are gunned down in a robbery gone wrong. The killer is never prosecuted. One of the fallen officers, Stanislaw Walczak, leaves behind a twelve-year-old boy, Jimmy...

Philadelphia 1995: Homicide detective Jim Walczak learns that his father's alleged killer, Terrill Lee Stanton, is out of prison. Walczak will be waiting, determined to squeeze the truth out of him - any way he can.

Philadelphia 2015: Jim Walczak's daughter Audrey, studying forensic science in grad school, reinvestigates her grandfather's murder for her dissertation. But the deeper Audrey digs, the more she realises: the man everyone thinks killed Walczak didn't do it...

And when the truth comes out, the danger's only going to grow. 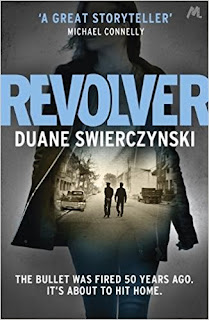 My review of Revolver


Revolver is a dark thriller with a touch of noir that spans three generations, from 1965 through to 2015. I loved it!

Stanislaw Walczak, a cop working in Philadelphia, is shot dead during a robbery in 1965. His son, Jimmy, decades later becomes a homicide detective and begins to investigate the death of his father, to find his father's murderer. It is during 2015 that Jim's daughter, Audrey, begins to investigate the murder as part of her dissertation studies. These three stories are all told within their own time frame, all are interwoven, and all shed a different light on what happened. Who did kill Stanislaw Walczak? That is at the heart of this story.

The author writes with such compassion, humanity and understanding of the human condition. It's a crime drama based upon the American dream. One that is always ultimately shattered. The multi layered narrative is fast paced and with well drawn characters that felt like friends by the time I read the final words. Each different generation, the father, the son and the granddaughter, were equally enthralling and offered a valid viewpoint and snapshot in time.

This is not your average dark thriller, as it is part family drama that explores the differences between the generation gap, and the relationship between father and son, and father and daughter. It does tackle serious issues such as racism, gun crime and sexual assault, but all of these issues are pivotal to the plot and for exploring the time frame in which the characters live. Although the book is primarily three different stories, it really did feel as if I was reading a family saga, and I wanted to know what happened to Stanislaw Walczak, just as much as the characters within this fascinating thriller.

Revolver is a very different type of thriller, and at first it did take me a while to get into, but once I met all three central characters, I was hooked. Revolver is a dark and compulsive read. It's a novel about the complexities of family life, of relationships and of living in America during the 1960s surrounded by racism and intolerance to anyone who appears to be different. It's an illuminating read, full of action and interesting characters. I really enjoyed it.

With thanks to the publisher and Bookbridgr for an Advanced Reader Copy.

Revolver was published by Mulholland Books on 10th August. It can be found on Amazon here.