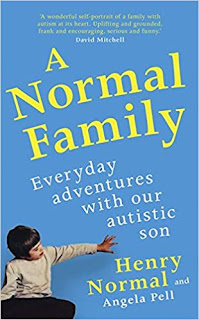 About A Normal Family

Johnny is nineteen. He likes music, art and going to the beach. He is also autistic - in his case that means he will probably never get a job, never have a girlfriend, never leave home. And over the last nineteen years this is what his father, TV producer and comedy writer Henry Normal and his wife Angela have been trying to come to terms with.

This is a book for anyone whose life has been touched by autism - it's about the hope, the despair, and the messy, honest sometimes comical day-to-day world of autism, as well as a wonderful, warm book about the unconditional, unconventional love between a father, a mother and a son.

My review of A Normal Family

This was such a special read for me. I loved reading about Johnny, about his love of painting and sheer joy for life. I enjoyed reading the viewpoints of his parents' Henry and Angela, their honesty, humour and love for their son shinning through on every page. It was a joy to read. And as a parent to an autistic child, I found this book so uplifting, yet grounding, in its absolute honesty.

I am sick to the back teeth of books trying to promote cures. What I need as a parent is simple everyday advice, and to read books such as this that echo very much how we are as a family. I found myself thinking, yes, my son does that, and, I tried that. I really do think that this book will be a complete eye opener to someone who is perhaps new to the world of autism.

The book is written with such love and humour. There are also poems at the end of each chapter. What I particularly liked was the two viewpoints. The 'Dad' and 'Mum' viewpoint, which helped to create a fully rounded image of family life. This book is honest, and tells it how it is, while cleary stating that this book is only about Johnny, about Henry's and Angela's experience of raising Johnny. It is not about Autism in general. It is a spectrum condition and effects the individual in many ways.

Johnny  Is 19, my son is 10, and I worry about his future as he gets older. These concerns were echoed in the book and I felt like weeping, in that someone had also expressed these concerns. As I said, this book is incredibly honest.

One section of the book touched upon feelings and that Johnny is incredibly empathetic. I think I punched the air at this point as the common misconception is that autistic individuals do not have feelings. My son has feelings and is very caring. Sometimes, I think he feels too much. I also liked the fact that the book mentioned 'refrigerator mothers, and that it was widely believed that autistic children were a result of unfeeling and 'cold' mothers who did not bond with their child. This is so very hurtful and offensive, but  thankfully is very much in the past.

I feel that people will view this  book in different ways, depending on their experiences of autism. But, I do feel that everyone would benefit from reading this book. It's not a heavy read with jargon and scientific facts. But rather, it is a family's story, and I feel that this is both beautiful and informative. It really is a must read for everyone.

With thanks to the publisher and Bookbridgr for the hardback copy for review purposes.

A Normal Family was published by Two Roads on 22 March.
Posted by jo at 13:37