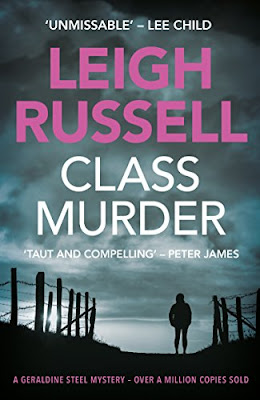 
With so many potential victims to choose from, there would be many deaths. He was spoiled for choice, really, but he was determined to take his time and select his targets carefully. Only by controlling his feelings could he maintain his success. He smiled to himself. If he was clever, he would never have to stop. And he was clever. He was very clever. Far too clever to be caught.

Geraldine Steel is reunited with her former sergeant, Ian Peterson.

When two people are murdered, their only connection lies buried in the past. As police search for the elusive killer, another body is discovered. Pursuing her first investigation in York, Geraldine Steel struggles to solve the baffling case. How can she expose the killer, and rescue her shattered reputation, when all the witnesses are being murdered? 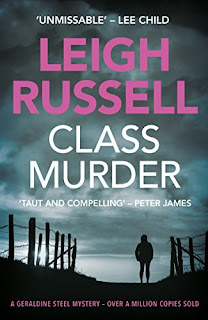 My review of Class Murder

Class Murder is the tenth instalment in the Geraldine Steel police series, but it's the first book that I have read by this author, and I loved it. I can also add that this book worked for me as a stand alone novel, although I now desperately want to go back and read the previous novels in the series.

This really is a gripping serial killer read that hooked me in from the very first chapter. Geraldine Steel is now living and working in York and has been demoted to a DS. She finds herself investigating the brutal murder of a young woman who was alone in her flat, and then the murder of a young man, both of whom went to the same school, and who were in the same class, many years previously. Geraldine finds herself, together with DI Ian Peterson, in a race against time to catch the killer, before they kill again.

This book is told from several viewpoints, including the killer, and I especially enjoyed reading these chapters that gave a snapshot into the mind of someone who kills. The depiction of the killer is cleverly done, with subtlety and clear insight into why they want to kill. Most importantly the killer is utterly believable.

I really enjoyed getting to know Geraldine and her back story. She is very much the new member of staff in this story and as well as having to get used to her new working environment, colleagues and York, she is also having to deal with her own personal changes, in terms of finding herself alone in a new city, miles away from her friends and family.

This is an absorbing and compelling serial killer read that explores the mind and motive of a killer, and how the police work to track down that killer. There are a few twists that I didn't see coming, but for me, this book worked because I liked Geraldine. I liked her work ethic, her vulnerability, and the fact that she is far from perfect. She was 'real' to me, and I can't wait to read more books in this series.

Class Murder is published by No Exit Press on December 7 and can be found on Amazon here.