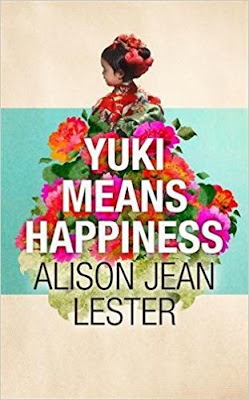 
Diana is young and uneasy in a new relationship when she leaves America and moves halfway around the world to Tokyo seeking adventure. In Japan she takes a job as a nanny to two-year-old Yuki Yoshimura and sets about adapting to a routine of English practice, ballet and swimming lessons, and Japanese cooking.

But as Diana becomes increasingly attached to Yuki she also becomes aware that everything in the Yoshimura household isn't as it first seemed. Before long, she must ask herself if she is brave enough to put everything on the line for the child under her care, confronting her own demons at every step of the way.

Yuki Means Happiness is a rich and powerfully illuminating portrait of the intense relationship between a young woman and her small charge, as well as one woman's journey to discover her true self.

My review of Yuki Means Happiness 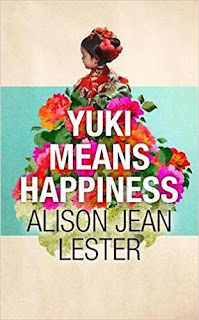 Yuki Means Happiness is such a beautiful book to read. This book explores Japanese culture, a differing culture, and is an interwoven mystery with two central love stories, that for a child, and for the young man Porter who is waiting patiently for Diana to come home to America. I adored this book for so many reasons and devoured it in a few days.

The book revolves around Diana, an American nurse who many years before helped Emi, a Japanese woman, who had given birth to Yuki Yoshimura. Diana helped her attend to the baby in the month following the birth. It is then two years later that she meets the husband, Naoki, once again, and agrees to become a nanny to Yuki following the couple's separation, as it appears that Emi has left Yuki to start a new life. But to begin with Diana only hears Naoki's point of view.

So I instantly found myself thrust into Japanese life, as did Diana, and I absolutely loved the colourful descriptions, the Japanese language and characters that we stumbled upon. I have always wanted to go to Japan, and in particular Tokyo, (I love the film Lost in Translation) so I gobbled up all the Japanese culture, food and general way of life.

The bones of this book is about the relationship between Yuki and Diana, and I particularly enjoyed the passages of the book that featured only the two of them, that helped to show me as a reader their special bond. Here is a young woman, a nurse, who takes on the role of mother and protector, and I admired her for this.

We also have the evolving relationship between Diana and Porter (oh I loved Porter) and of how Diana gained perspective on her relationship with him because of the distance between them. This really is a story about how this young woman finds out who she is and where her life should be heading. It is also about her dealing with issues from her past that then help to shape her future.

Yuki Means Happiness is a deceptively clever read, as nothing is as it first seems, and the cracks within the Yoshimura household soon begin to appear. The real joy is in the observing the blossoming relationship between Diana and Yuki, how Diana grows in strength and how she begins to find her place in the world. Part romance, part mystery (as to why Emi left her daughter) this really is a most beautiful and enjoyable novel that is deliciously slow paced. I thoroughly enjoyed it.

With thanks to the publisher and Bookbridgr for providing a hardback copy of the book for review purposes.

Yuki Means Happiness was published by John Murray in hardback on 27 July 2017. It can be found on Amazon here.