Should You Ask Me by Marianne Kavanagh 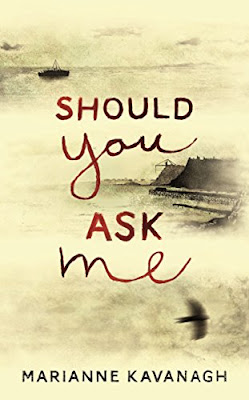 About Should You Ask Me

'I've come about the bodies. I know who they are.'

Just before D-Day in 1944, on the Isle of Purbeck in Dorset, an elderly woman walks into a police station. She has information, she says, about human remains recently discovered nearby.

The bodies could have stayed buried for ever - like the pain and passion that put them there. But Mary Holmes is finally ready to tell the truth.

The young constable sent to take her statement is still suffering from the injuries that ended his army career. As he tries to make sense of her tale, William finds himself increasingly distracted. Mary's confession forces his own violent memories to the surface - betrayals and regrets as badly healed as his war wounds.

Over six days, as pressure builds for the final push in Europe, two lives reveal their secrets. Should You Ask Me is a captivating story about people at their worst and best: raw, rich, and utterly compelling.


My review of Should You Ask Me


Should You Ask Me by Marianne Cavanagh is pure joy from the beginning to the very last word. It's a story that bridges the gap between generations, that tells of secrets, lies and deceit. It is a deliciously slow read that you need to take your time over, and I adored this slow and leisurely pace.

The novel is set in the Isle of Purbeck, Dorset, just before D Day in 1944. An elderly lady, Mary Holmes, walks into a police station and says that she knows about the bodies that have been recently found in the area. She wants to confess and tell her story. William, a young officer, who was wounded in the war, both physically and mentally, is put in charge of taking her statement. But taking the statement is not a simple, nor quick task, as it takes several days, the rest of the book, for Mary to give her statement and to confess to her sins. It is this exchange between the two generations that is simply beautiful to witness.

This is a beautiful and almost poetic tale about a young woman's life. We see the old woman before us, and the rambling old woman whom we first perceived is revealed to be eloquent, caring and a woman who once lived a difficult and very different life. Mary's story captivated me. The gentle shift from present back to the past is beautifully orchestrated, and seamless. We hear Mary's story at the same time as William, and I couldn't wait for her to visit the police station each morning to resume telling  her story.

But this story is not just about Mary's past, it is also about William's former life. He, like me, thought that Mary had nothing of significance to say, but we were both wrong. The telling of Mary's story helps him to unearth his own demons and to face his own past. He enables her to tell her tale, but she helps him in more ways than he could ever have imagined.

Should You Ask Me is a story about two different generations, who ultimately share a common bond, that of loss. Both have their own story to tell. This was such a joy to read and I can't praise it highly enough. If you love a gentle read with lots of heart and wonderful poetic writing, then this is the book for you.

Should You Ask Me was published by Hodder & Stoughton on 18 May. It can be found on Amazon here.

With thanks to Bookbridgr and the publisher who provided a copy for review purposes.