A Whiff of Cyanide by Guy Fraser-Sampson #bookreview 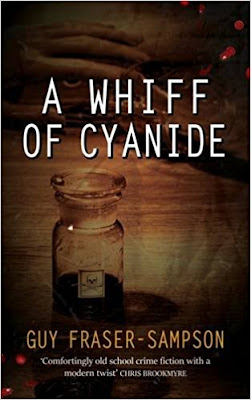 About A Whiff of Cyanide

The third volume of the bestselling Hampstead Murders sees the team become involved with a suspicious death at a crime writers' convention. Is this the result of a bitterly contested election for the Chair of the Crime Writers' Association or are even darker forces at work? Peter Collins, who is attending the convention as the author of a new book on poisoning in Golden Age fiction, worries that the key clue to unlock this puzzle may be buried within his own memories. A character called Miss Marple offers her advice, but how should the police receive this? Meanwhile an act of sudden, shocking violence and a dramatic revelation threaten tragic consequences...

My review of A Whiff of Cyanide

A Whiff of Cyanide is the third installment in the Hampstead Murders series by Guy Fraser-Sampson. I read and reviewed the previous book, Miss Christie Regrets, back in January, which I enjoyed immensely, and this book was just as enjoyable. It was lovely to be reacquainted with old friends, as that is how they felt to me. I do feel that this series works best by reading in chronological order, although having said that, this book does work well as a stand atone novel. If you love reading crime drama from the past, from the Golden Age of crime investigations, the you will love this book.

So, once again we are introduced to the Hampstead police team. We have Detective Superintendent  Simon Collinson, a gentleman who is happily married and with a baby on the way, Detective Sergeant Kate Willis and her boyfriend, psychologist Peter Collins. We then also have Detective Sergeant Bob Metcalf, Kate's other boyfriend. At the beginning of this novel, all three of them are living together in what Peter describes as a 'ménage a trois' and this made me smile. They are living together, but it seems in a completely innocent way, not as it would be portrayed in today's modern, gritty crime thrillers, and I liked this.

The story begins at a crime writers' convection in Hampstead, in which Peter has been invited as a new member. His non-fiction book, about the theme of using poison in Golden Age crime fiction, is soon to be  published, and although he has been to many of these events as a spectator, he is very excited to attend as a participant. It is while there, when attending an evening reception with Kate, that a suspicious death takes place, and one that involves cyanide. Is the death murder? and who is responsible? That is what the police need to find out. Surprisingly, it is Peter and one of the other members, a Miss Marple (yes, she really is called that as she plays Miss Marple in the television series - loved this aspect of the story) that help the police with their investigation.

This is such a beautifully told story, that uses language from a bygone time. People no longer talk as they do in this book, and I loved it for its nostalgia and sense of honesty. I loved the fact that the police work on intuition, interviews and less on forensic evidence. It is so refreshingly pure, in the sense that there is no profanity or nudity. It is a completely different type of detective story, one that you can't help but love. While reading I could clearly see the characters as they would appear on screen, tinged in sepia. The present day is presented on the page as the past, it is truly authentic. I knew I was reading a modern crime novel, but one that echoed the values and traditions of a bygone era. This is what makes the novel so refreshing. It really is as if you are reading an Agatha Christie novel, but with a modern twist.

The plot is also hugely enjoyable and I honestly couldn't work out who the murderer was and what their motive was, not until it was revealed to me. It really did keep me guessing to the very end. If you want to read a different kind of crime novel, one that harks back to the Golden Age of detective stories, but with an incredibly modern twist, then I think that you will enjoy this book.

With thanks to the author and Urbane Publications for the Advanced Reader Copy.

A Whiff of Cyanide is published on 2 June by Urbane Publications and is available to buy from Amazon here.


GUY FRASER-SAMPSON is an established writer, previously best known for his 'Mapp and Lucia' novels, which have been featured on BBC Radio 4 and optioned by BBC television. His debut work of detective fiction, Death in Profile, the first in the Hampstead Murders series has drawn high praise from fellow crime writers as well as from readers on both sides of the Atlantic.
Posted by jo at 05:00