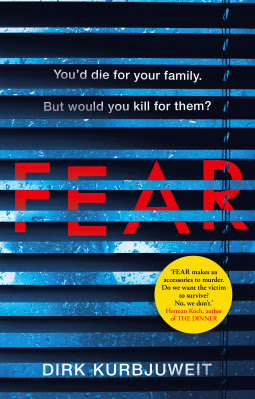 BUT WOULD YOU KILL FOR THEM?

So what if yours was being terrorised by a neighbour – a man who doesn’t listen to reason, whose actions become more erratic and sinister with each passing day? And those you thought would help – the police, your lawyer – can’t help you.

You become afraid to leave your family at home alone. But there’s nothing more you can do to protect them.

'FEAR shifts our moral codes. It makes us sympathetic to violent revenge, accessories to murder. Do we want the victim to survive? No, we don't' - HERMAN KOCH, bestselling author of THE DINNER

My review of Fear

Wow! Where do I start with this book review? I absolutely loved Fear for its originality, creeping sense of unease and that knowledge that everything that happened was completely believable, and could happen to any one of us. This really is a compelling and challenging psychological thriller.

Fear is the first novel by Dirk Kurbjuweit to be translated from his native German, but is the author's seventh novel. He writes with cutting clarity, having based the novel om real life vents, those of being stalked. This somehow makes the events of the novel even more chilling.

Dieter Tiberius is the stalker. He lives in the basement flat. A man of a different social class to the rest of the building, and to the Tiefenthaler family: Randolph and his wife, who have two small children. He is described as being different from the very beginning of the story. He looks different and he acts differently, he is an outsider. From the way that his character is displayed on the page, we should be fearful of him. Does he deserve the violent revenge that is bestowed upon him? This is where the novel is very clever, in that my moral compass shifted as I read through the pages.

We learn at the beginning of the story that Hermann Tiefenthaler, father to Randolph, is in prison for manslaughter. The victim is Dieter Tiberius, but the true nature io the crime, and exactly what happened are not revealed until the very end of the story. We read Randolph's thoughts about what has happened, his relationship with his father, past and present and how he perceives his relationship to be with his wife. This is very much a slow burning and dark read about revenge and the need to protect your family at all costs. To completely understand the  motives of the Tiefenthaler family, we need to understand them, their character, and this is what the author does beautifully, through the telling of stories, encounters and how life was for Randolph growing up in a household that was full of guns.


Fear tackles some serious issues. Those of gun ownership, child abuse, social inequality and social class. How we are raised and the social class we are elevated to, all have equal importance in this novel. For me though, the heart of this novel came down to the fact that because the police would bot protect Randolph and his family from the torrent of psychological abuse that they were receiving, they felt they had to take matters into their own hands. The law is powerless to protect them from psychological abuse. This is in itself an interesting concept, that of a psychological attack, the written word, one spoken word against another. Whose version of events do we really believe?

Fear is a challenging read. Do we believe Randolph? Do we empathise with the victim? The real question is, how far would you go to protect your family? It will leave you reeling. My thoughts kept coming back to this book, days after reading it. This book is not published until January next year and it already has a huge following on social media. This book is going to be huge, and for very good reasons.


Dirk Kurbjuweit is deputy editor-in-chief at Der Spiegel, where he has worked since 1999, and divides his time between Berlin and Hamburg. He has received numerous awards for his writing, including the Egon Erwin Kisch Prize for journalism, and is the author of seven critically acclaimed novels, many of which, including Fear, have been adapted for film, television and radio in Germany. Fear is the first of his works to be translated into English.