The Secret Wound by Deirdre Quiery 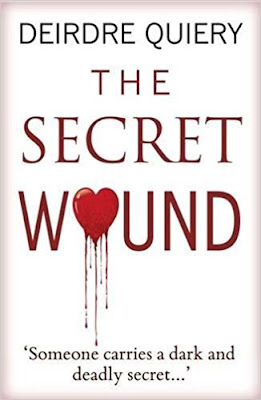 About The Secret Wound


Deirdre Quiery's follow up to the critical success of Eden Burning, The Secret Wound draws the reader into a complex web of relationships within the ex-pat community in Mallorca, discovering their dangerous secrets...and a potential murderer in their midst. One of their number carries a dark and deadly secret from their past, and has murderous plans for a fellow ex-pat. Can any of the close- knit community discover the brutal plans before they are all put in mortal danger? Deirdre Quiery's gripping thriller is not just an addictive page turner, but provides a compelling exploration of human emotion and desires, and the terrible costs of jealousy and ambition. Perfect for fans of Jane Corry and Amanda Brooke.

My review of The Secret Wound

The Secret Wound is a psychological thriller that for me explored family and the neanng of life. This was so much more than a murder mystery. This is a book that explores the inner workings of the mind and how our childhood effects who we are. This really is a deep thinking book.

The novel is set in Belfast, and then Mallorca, during 2013.  At the beginning we are introduced to Gurtha, who is visiting the home of his ageing parents, Nuala and Paddy. However what he is greeted with is his dead mother, at the bottom of the stairs. This is such a powerful opening to a novel and I was instantly hooked. Who had killed Nuala and why? We then follow Gurtha as he tries to find out who killed his beloved mother, and in doing so the plot takes on a sinister turn of events.

It is after his mother's funeral that Gurtha is persuaded to go on a 40 day sabbatical to Mallorca after his mother's death. A close family friend, Cormelia, lives out there and she makes all the necessary arrangements for him to have much needed time away from Belfast.  This is the time for him to re evaluate life, to put his life into perspective. As I have already mentioned this is a very deep thinking book about the bigger picture, with a murder mystery at its very core.

Gurtha is a motivational speaker, he runs art exhibitions, and is a lecturer on the subject of  Conciousness Studies. The essence of his character, and the way in which he deals with his grief is reflected in the themes of the book. The book also has many wonderful life affirming quotes from J Rumi, a Persian poet from the 1200s. When I read the first quote, at the very beginning of the novel, about how a wound allows light to enter the body, I just knew that I was in for a completely different type of physiological thriller/murder mystery, and I was right. I also believe that these quotes are directed at Gurtha, at his time of grief. His relationship with his mother was extremely close, some may say cloying. This book, although a psychological murder mystery is also a book about grief and coming to terms with loss.

What the author does so wonderfully well is to beautifully evoke both Belfast, and then the ex-pat community who live in Soller, Mallorca. I have been to neither Belfast nor Mallorca, but I felt as if I was there and that I knew every nook and  cranny of the spaces that these characters inhabited. There are many wonderful and colourful characters within the novel. Paddy I have to admit was my absolute favourite.  I never truly got to grips with Cornelia, for me she was an enigma from the very beginning, and because of this she did intrigue me. I needed to know more about her life, her past, and I did learn these things as the novel progressed.

The Secret Wound is a beautiful story and one which I find hard to box into a genre. It is beautifully written, lyrical at times, and simply tells the story of what it is to love and to be loved. It is a story about grief and of why people choose to commit murder. The Secret Wound hooked me in from the very beginning and I was so sad to read the final words. Highly recommended.

The Secret Wound, published by Urbane Publications on 9 June. 2017, is available on Amazon here.


Deirdre Quiery was born in Belfast in 1957. She was 14 when her family were evicted from their home in North Belfast during 'The Troubles'. The family then 'squatted on 'The Peace Line' - the frontier of violence between the Catholic District called Ardoyne and the Protestant Shankill Road. These experiences over the next 10 years which included being held hostage, two uncles being murdered and three car bombs exploding outside her home in North Belfast, inspired "Eden Burning".

In search of adventure, Deirdre gave up her full time job, sold her home in Oxford and travelled to Mallorca with her husband and cat and while living in an olive grove with no running water, no TV, no internet and there found the inspiration for her second novel "The Secret Wound" to be published by Urbane Publications in June 2017 which is set in Northern Ireland and Mallorca.

Deirdre loves to not only write but paints, exploring myths and symbols in both writing and painting.

She was First Prize Winner of the Alexander Imich Competition in the USA for inspirational writing about the human condition. Her debut novel "Eden Burning" was nominated for the People's Prize in the UK.
Posted by jo at 05:00