We've Come to Take You Home by Susan Gandar #bookreview 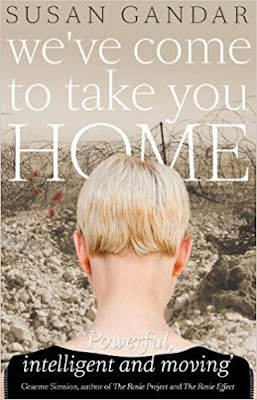 About We've Come to Take You Home


Samantha Foster and Jessica Brown are destined to meet. But one lives in the 20th century, the other in the 21st... It is April 1916 and thousands of men have left home to fight in the war to end all wars. Jessica Brown's father is about to be one of these men. A year later, he is still alive, but Jess has to steal to keep her family from starving. And then a telegram arrives - her father has been killed in action. Four generations later, Sam Foster's father is admitted to hospital with a suspected brain haemorrhage. A nurse asks if she would like to take her father's hand. Sam refuses. All she wants is to get out of this place, stuck between the world of the living and the world of the dead, a place with no hope and no future, as quickly as possible. As Sam's father's condition worsens, her dreams become more frequent - and more frightening. She realises that what she is experiencing is not a dream, but someone else's living nightmare...


My Review of  We've Come to Take You Home

We've Come to Take You Home is a poignant read about family, history, war and reconnecting with your past to form your future. I had no idea of what to expect when I started to read this debut novel. Was it a love story? An historical read? The genre I find very hard to define, even now once I have read it, but I loved this book for its ghostly themes of love and the past,  and strong female characters who both eloquently told their stories.

We've Come to Take You Home tells the story of two women, four generations apart. Although the stories appear to be separate, as I progressed through the book I realised that the two stories were linked in some way. Jess is living through the hardship of the First World War. Her father has been recently deployed and she needs to help support her mother and new baby brother. The depictions of war are harrowing and brutally honest. When Jess is forced to move to London to work as a maid of all jobs, my heart ached for her. She was thankful for a roof over her head and food in her belly, but at what cost? Was she truly living life?

We also read Sam's story, which is just as moving as Jess's, although in an entirely different way, there are similarities to what they are both going through. They are both young, they are having to adjust to life without a father, and they are both mature beyond their years. She lives in the present day with her mother and pilot dad. She has always seen things, people, that are not really there, and as we read her story , she shares with us the fact that she sees images of war. She sees war nurses attending the sick, the bombed out fields and the sick and dying soldiers. This happens to her without warning, she is simply sucked back in time, living via another person. This is obviously terrifying, but she keeps what she believes are visions to herself, as who would believe her? She has no idea why she sees such images, and neither do we.

This is such a clever story, and on paper you would think it could not possibly work. But, it does. Through both Sam and Jess we learn about what it must have been like for a normal, working class family to live through the hardship of war. Although this is the primary story, we also have Sam's struggle, in her trying to reunite her broken family. Her father is a pilot, and on the day that he leaves the family home, he is involved in an accident that leaves him in a coma. Sam has to deal with her father's critical condition, as well as having to learn to cope with the evolving relationship with her mother.

This is a deeply moving book about the horrors of war, about family and of the important bond between father and daughter. It is beautifully written and the ending couldn't have happened any other way. I highly recommend this novel and look forward to reading more work by Susan Gandar.

We've Come to Take You Home, published by Matador on 28 March, 2016, can be found in Amazon here.

Susan Gandar grew up surrounded by stories and storytelling.

My father, John Box, was a film production designer, working on ‘Lawrence of Arabia’, ‘Dr. Zhivago’, ‘The Great Gatsby’, ‘A Man For All Seasons’ and the musical ‘Oliver’. Our house was always filled with people, usually eccentric, always talented, invariably stroppy, discussing stories. My mother put my father’s four Oscars to good use as toilet roll holders, doorstops and hat stands.

A major chunk of my childhood was spent loitering around on film sets. Who needs an ‘English education’ when you have the marble-dusted streets of downtown Moscow, ten miles outside of Madrid, to explore?

But then the years of ‘Who Will Buy My Sweet Red Roses’ came to a rather abrupt end. Reality knocked on the door in the guise of the Metropolitan Line to Shepherds Bush and the BBC. Working in television as a script editor and story consultant, I was part of the creative team responsible for setting up ‘Casualty’. I became known for going after the more ‘difficult’ stories at the same time successfully racking up viewing figures from 7 to 14 million.

I went on to develop various projects for both the BBC and the independent sector. The period I enjoyed most was working with Jack Rosenthal, a wonderful writer, on the series ‘Moving Story’ – ‘That’s a situation, a good situation, but now you need to make it into a story.’

Martin, my husband, was made an offer he couldn’t refuse and we left England to live in Amsterdam. ‘Ik wil een kilo kabeljauw, alstublieft’ will, if all goes well, buy you a piece of cod – I decided to concentrate on my writing rather than my Dutch pronunciation.

My debut novel, ‘We’ve Come to Take You Home’, set in the present and in 1918, a crossover aimed at the adult and young adult women’s popular fiction market, was published March 2016.