The Ultimatum by Karen Robards #bookreview 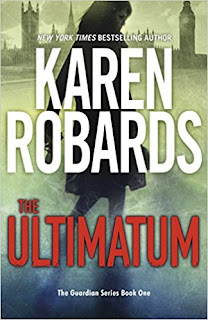 Bianca St. Ives is smart, talented and beautiful. She's also a high-end thief, a master manipulator, a card shark, and a genius of disguise.

A femme fatale Robin Hood running a multinational firm with her father, she makes a living swindling con men out of money they stole and giving it back to those who should rightfully have it. Her father has prepared her well to carry on the family business, and now the prodigy has surpassed the master.

But her latest mission didn't go to plan - millions of dollars and top secret government documents went missing, and her father was supposedly killed. But not everyone believes in his death, including the US government. They'll stop at nothing to capture Richard St. Ives - a high-value target who has been on most-wanted lists all over the world - even if it means using Bianca as bait.

With only a fellow criminal for backup and her life on the line, it's up to Bianca to uncover the terrifying truth behind what really happened . . . and set it right, before it's too late.

My review of The Ultimatum

Well, The Ultimatum is my first ever Karen Robards book and it won't be the last. Wow! This book was amazing. It left me breathless, from the gripping and very scary prologue, right through to the last word, I just couldn't put it down. Ms Robards really is a wonderful storyteller. This is a fast paced thriller that pulls no punches, is action packed, but is also heavily character driven,  and this surprised me. It's an entertaining and compulsive read.

I couldn't put this book down, it really does have it all: action, suspense, crime, romance and a female protagonist who is utterly spellbinding, Bianca St. Ives. The beginning of the novel describes Bianca's situation, as she finds herself in the middle of an aborted mission that has gone horribly wrong. Wow,  as I read these first few chapters that described her predicament, I saw the movie playing in my mind. The descriptions of what was going on around her, as well as her inner monologue were so captivating. I actually felt that I was Bianca, as my heart raced and the panic began to set in... and the book continued at this relentless pace.

The book is obviously plot driven and focusses heavily upon action and suspense. However, this book is also heavily character driven. I often find when reading this genre that character is less important than that of action, but this book redresses the balance, as character is incredibly important. Bianca is obviously the main focus and I really got to know her and her thought processes throughout the novel. I needed to understand her I feel to fully appreciate the novel. Without such a strong female lead, and a likeable one who has a soft and vulnerable core than you otherwise might expect, this book would not be as much of an emotional read, and it is highly emotional.

The Ultimatum is a crime thriller that is packed full of plot and exciting, memorable characters and I loved it. I loved Bianca and what she stood for. It was an incredibly fun, enjoyable and emotional read... and oh my, that ending! I can't wait to read book two in the series.

With thanks to the publisher and Bookbridgr for an advanced hardback copy for review purposes.

The Ultimatum is released in hardback by Hodder & Stoughton on 15 June. 2017. It is available
from Amazon on the following link.


Karen Robards is the internationally bestselling author of over forty romantic suspense novels, which have regularly appeared on the New York Times, USA Today and Publishers Weekly bestseller lists, among others. She is the mother of three boys and lives with her family in her hometown of Louisville, Kentucky.