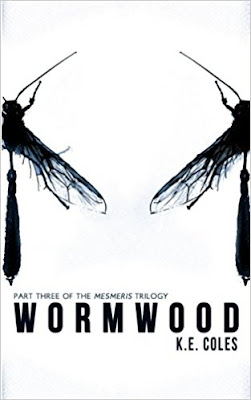 ‘I wore my guilt like a coat, but it was one I was used to wearing – old and worn and shabby, and it fitted me perfectly.’ They’re finished, aren’t they? Mesmeris. But what if they’re not? How far will you go to protect the people you love? Pearl has moved on with her life. She has a home, a job, a wonderful friend in Spicer, and a beautiful child – everything anyone could want. If only she could stop loving Art.


My review of Wormwood

Wormwood is the third instalment in the deeply dark Mesmeris series. I have had the great pleasure in reading the previous two books and this book was just as exciting and enjoyable to read. I'll just add here that the books are best read in chronological order. Wormwood carries off from where Book Two ended, so I won't say any more in case you haven't read Infixion. All I will say is that you are in for a treat, as this book is such a dramatic ending to the trilogy.

For me, the star of this book is Pearl. We see a more mature Pearl as she has had to grow up, particularly now that she is a mother.  She wants to start a new life for herself with her son and friend Spicer, but can she truly be free of Mesmeris? This is the exciting premise of Wormwood and from the very disturbing start, the action never stops.

K E Coles is an exceptionally gifted storyteller. She blends the theme of the occult and some very disturbing storylines, into what is predominantly a YA book, but as I have said in my previous reviews of this author's work, these are YA books like no other. Yes, the subject matter is somewhat disturbing and gritty, but the story is told with such empathy and understanding that as a reader we are given perspective, we can stand back and truly think about what is happening, and these novels do make you think. Wormwood had me thinking about what it is to be a mother, a friend and what I would do to protect my child. It's a thought provoking read.

Wormwood is an exciting roller coaster of a read as we learn the answers to many unanswered questions, left over from the previous two books. We learn more about the notorious Papa, a character who genuinely frightened me,  as well as finding out more about Art. For me though, the character that I bonded most with was Spicer. We should all have a Spicer in our lives.

Wormwood is a deliciously dark and compelling read. If you have read Mesmeris and Infixion, you are in for a wonderful finale. If you are new to this series, begin with Mesmeris, you can read my review here.

With thanks to the author who provided a digital copy for review purposes.

Wormwood was published on 21 Jun. 2016 and is available to buy from Amazon here

Karen Coles was born in Taplow, Berkshire. Before beginning her writing career she was an exhibiting artist and occasional art tutor.
Mesmeris, a darkly compelling tale about a malign religious sect, Infixion, its sequel, and the third and final book in the trilogy, Wormwood, are all available from Amazon.
Karen now lives in beautiful West Wales, where she's busy writing her fourth novel.
She's on twitter @KEColeswriting