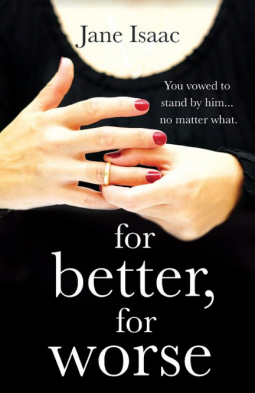 About For Better, For Worse

Stuart Ingram was once a respected local councillor...
The first time the police knocked on Gina's door, they arrested her husband.
The second time, they accused him of child abuse.

But he died a guilty man.

This time, the police are here for Gina – to tell her that her husband is dead. Murdered, just two weeks before his trial.

Gina always stood by her husband. Even when everyone else walked away. She believed the trial would clear his name. But now Stuart is dead.

And his wife is the suspect.

It's a race against time for DC Beth Chamberlain to uncover the truth – especially when a second man turns up dead. My review of For Better, For Worse

A new Jane Isaac novel is always such a treat and For Better, For Worse, really is no exception. As always the writing is punchy, the pace is fast and the characters are well drawn. This book blends together a murder mystery and an unfolding family drama to create a dark, tense and unsettling read. I could not put this book down.

The story begins with the death of disgraced local businessman and councillor, Stuart Ingram, who is about to face charges of child sexual exploitation. He is murdered, killed in a hit and run only a few weeks before the trial is about to start. Everyone has abandoned him, apart from his wife, Gina, who has stood beside him. But was she right to do so? Was Stuart guilty or innocent? Who killed him and why? The opening chapters conjure up so many questions and more are asked as another man is found dead.

DC Beth Chamberlain investigates the murder and her role as Family Liaison Officer gives her a greater insight into the Ingram family dynamics. She meets not only Gina, but their estranged daughter. Beth starts to dig into the past and the allegations that Stuart faced. Is his death related to the trial or to something else?

This novel looks closely at how a family deals with the strain and tension that is involved when a loved one is accused of a terrible crime. I thought the portrayal of Gina was incredibly genuine. I empathised completely with this character and felt her anguish and tug of war emotions for the man she loved.

We also have another strong female presence in the form of DC Beth Chamberlain. Wow, the strength of this woman. Wouldn't we all want to be like her. She is trying to juggle life on the force after a past traumatic case, while dealing with her sister who doesn't always make the best life decisions. I admire this character so much. She is so very real and an utterly fresh voice in the realm of detective slash domestic noir fiction.

For Better, For Worse, is a gripping, immersive and disturbing read. Having said that, this book is also full of hope and that there is light in a world of darkness. I look forward to reading the next instalment in the DC Beth Chamberlain series.

For Better, For Worse is published on March 19th by Aria.