The Gift Maker by Mark Mayes 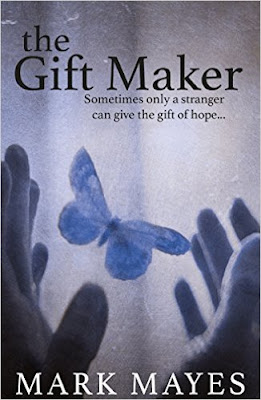 About The Gift Maker

'Gifts ought to be free, but they never are. They tie you to the wishes of others. To your own sad expectations. To the penitentiary of your dreams.'

Late one night, Thomas Ruder receives a strange package: a small blue box. Another such item is delivered to his friend Liselotte Hauptmann. These 'gifts' will change their lives forever. In the far-off border town of Grenze, a play is to be performed at the Sheol Theatre. Reynard the impresario expects a very special audience. Thomas and Liselotte, together with their friend Johann, are drawn into Reynard's seductive web, as Daumen, the gift maker, must decide who his master really is. The Gift Maker is a story about identity, about fulfilling your dreams and becoming the person you always were ... at whatever cost.

My Review of The Gift Maker

The Gift Maker is a magical fantasy novel like no other, and I loved it. To try and define the genre that this book fits into is incredibly difficult. It is a fantasy novel, but it is also a magical fairy tale alongside a story of good and evil and of creation. It's an exceptionally clever novel, that uses poetic language, in a world so unlike our own.  This is a world where reality sits alongside magic.

And just look at the cover. It is so beautiful.

The Gift Maker is other worldly, it remnded me of when I read Gormenghast by Mervyn Peake many years ago, and for some reason the film Dogville, popped into my mind while I was reading (which I loved).  The writing style is very different to the contemporary fiction of today, but I soon relaxed into the melodic dialogue and found myself immersed in this beautiful literary world.

So, the story begins when Thomas is woken in the middle of the night by his landlady, who has a small box to give him. This has been hand delivered by a mysterious man with large hairy hands. Thomas is afraid of what is inside the box and so shuts it away in his bedside drawer. He tells nobody about this gift, not even his closest friend, Johann. He then finds out that a friend of his, Liselotte, whom he cares deeply about, has also received a strange box. She confides in him one evening about what is inside the box. Thomas is unsupportive of Liselotte's revelation, and as a result she dismisses him. He is despondent as he really wanted to be more than just friends. It is the following day that Liselotte disappears, leaving a note behind, simply telling Thomas that she has gone to Grenze. It is from this moment on that the book takes a dramatic turn, and the lives of these three friends is never the same again.

I can't really disclose any more about what happens after this, as it would give the entire plot away, and I really don't want to do that. All I will say is that the three friends go on their own separate journeys of self discovery, defined by the gifts that they receive.

What I loved about this book was the description of the faraway ghost town of Grenze. This is a place that I would never wish to travel to. For me, this tiny village represented the end of the world.

The Gift Maker is not an easy read, in the sense that it makes you think, it is a philosophical read with multiple interpretations available to the reader, depending upon their personal viewpoints and past experiences. This book can be interpreted in many different ways. For me, this book was about good and evil, how the world began and of that all consuming first love. This book is predominantly about self discovery and it asks the question:

Would you really do anything, no matter the cost, to fulfill your wildest dreams?

The Gift Maker is a breathtaking read of self discovery. It is a magical tale of love, morality and of doing the right thing. And as for the ending...well, it was completely unexpected but brilliant. I thoroughly enjoyed this book and highly recommend it.

The Gift Maker is published by Urbane Publications on February 23rd, and is available to buy from Amazon here.

Before becoming a writer, Mark trained as an actor at the Royal Academy of Dramatic Art. He subsequently worked in theatre and television for several years, both in the UK and abroad. He has worked variously as a cleaner, care-worker and carer, salesman, barman, medical transcriptionist, warehouse worker, and administrator.

Mark has published numerous stories and poems in magazines and anthologies in the UK, Eire, and Italy, and in particular has had several stories published in (or accepted for) the celebrated Unthology series (Unthank Books). His work has been broadcast on BBC Radio 4 and the BBC World Service. He has been shortlisted for literary prizes, including the prestigious Bridport Prize.

In 2009, Mark graduated with a First Class Honours Degree in English (Creative Writing and Critical Practice) from Ruskin College, Oxford.

Currently living in South Wales, Mark is also a musician and songwriter, and some of his songs may be found here: HTTPS://SOUNDCLOUD.COM/PUMPSTREETSONGS

The Gift Maker is his début novel and will publish spring 2017.