Handcuffs, Truncheon and a Polyester Thong by Gina Kirkham #bookreview 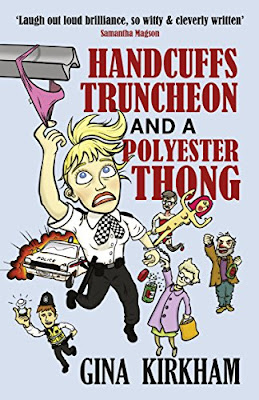 About Handcuffs, Truncheon and a Polyester Thong


Meet Mavis Upton. As mummy to 7-year old Ella, surrogate to far too many pets and with a failed marriage under her belt, Mavis knows she needs to make some life-changing decisions. It's time to strike out into the world, to stand on her own two feet … to pursue a lifelong ambition to become a Police Officer. I mean, what could go wrong?

Supported by her quirky, malapropism-suffering mum, Mavis throws herself headlong into a world of uncertainty, self-discovery, fearless escapades, laughter and extra-large knickers. And using her newly discovered investigative skills, she reluctantly embarks on a search to find her errant dad who was last seen years before, making off with her mum's much needed coupon for a fabulous foam cup bra all the way from America.

Follow Mavis as she tackles everything life can throw at her, and revel in Gina Kirkham's humorous, poignant and moving story of an everyday girl who one day followed a dream.


My review of Handcuffs, Truncheon and a Polyester Thong

Handcuffs, Truncheon and a Polyester Thong is the debut novel from Gina Kirkham. This is a witty, intelligent and incredibly funny book that had me laughing out loud. But don't be fooled by the fabulous cover (which I love) as this novel has so much depth, it's not just a series of funny stories (which are in fact, hilarious). The stories that are told are mixed with real life emotions, beautifully observed reality and a protagonist who you just can't help but love and admire. While reading, I was constantly drawing comparisons to the scouse sitcom, Bread, and to Only Fools and Horses, so you get the idea of how much I loved this book. It's that good.

So, this is Mavis Upton's story, a police officer, a mother, a daughter and a person in her own right, who tells us the personal story of her life. Her story begins from when she first had the idea forming in her mind about joining the police back in 1988, right up to the present day of 2008. I was with Mavis every step of the way and felt like I really knew her, 'nellies' and all! The author writes so beautifully, and makes the art of storytelling seem completely effortless. I was gently propelled from one hilarious story to the next, revelling in all of the antics that she got up to. The real joy for me, was watching her transform from a rather naïve woman who had an idealistic view of the world, and who would only drive at a maximum of 40 mph, into the perceptive, 'chasing bad guys' police officer that she finally became.

Along the way we meet some wonderful colourful characters, and that's not just the local criminals! We meet her young daughter, Ella, who seems mature beyond her years and who shares her mother's wit and sense of humour. For me though, it was Mavis' mother, Josie Upton, who was the star of the show with her plentiful malapropisms. A woman who was strong, fiercely protective of her family and who constantly saw the funny side of life, even in the darkest of times. The scene with the 'squiffy' formed a huge lump in my throat and I'll admit that I had to put the book down for a little while in order to gather my thoughts. Ms Kirkham is a storyteller who writes from the heart, with compassion, humility and overwhelming understanding of what makes us who we are.

Handcuffs, Truncheon and a Polyester Thong is like a breath of fresh air. It is packed full of scouse humour, which reminded me so much of my youth growing up on the Wirral. While reading I wondered what stories were based upon reality, thinking that most of them probably were, and this brought a huge smile to my face. This novel also touches upon the more serious side of policing, as there were a few stories that made me sit back and really think. One such story dealt with the safety and welfare of children, and this really brought home the reality of what horrors the police have to deal with, before going on to the next job.

This is a highly original novel and an emotional roller coaster of a ride that had me in stitches. It is such a feel good book. I have a feeling that Mavis Upton will be with me for a very long time, and I will never quite look at a polyester thong in quite the same way ever again!

Handcuffs, Truncheon and a Polyester Thong is published by Urbane Publications on May18th and is available to buy from Amazon here.


Gina was born during the not-so-swinging 50's to a mum who frequently abandoned her in a pram outside Woolworths and a dad who, after two pints of beer, could play a mean Boogie Woogie on the piano in the front room of their 3-bed semi on the Wirral. Being the less adventurous of three children, she remains there to this day - apart from a long weekend in Bognor Regis in 1982. Her teenage years were filled with angst, a CSE in Arithmetic, pimples, PLJ juice, Barry White and rather large knickers until she suddenly and mysteriously slimmed down in her twenties. Marriage and motherhood ensued, quickly followed by divorce in her early thirties and a desperate need for a career and some form of financial support for herself and her daughter. Trundling a bicycle along a leafy path one wintry day, a lifelong passion to be a police officer gave her simultaneously an epiphany and fond memories of her favourite author Enid Blyton and moments of solving mysteries. And thus began an enjoyable and fulfilling career with Merseyside Police. On reaching an age most women lie about, she quickly adapted to retirement by utilising her policing skills to chase after two granddaughters, two dogs and one previously used, but still in excellent condition, husband. Having said goodbye to what had been a huge part of her life, she suddenly had another wonderful epiphany. This time it was to put pen to paper to write a book based on her experiences as a police officer. Lying in bed one night staring at the ceiling and contemplating life as she knew it, Gina's alter-ego, Mavis Upton was born, ready to star in a humorous and sometimes poignant look at the life, loves and career of an everyday girl who followed a dream and embarked upon a search for the missing piece of her childhood.
Posted by jo at 05:00