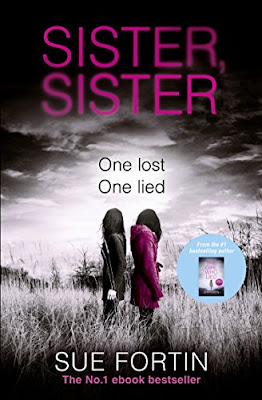 Clare thinks Alice is a manipulative liar who is trying to steal her life.
Alice thinks Clare is jealous of her long-lost return and place in their family.

One of them is telling the truth. The other is a maniac.
Two sisters. One truth.

What people are saying about SISTER SISTER:
‘I would definitely recommend this if you love psychological thrillers’ – Stardust Book Reviews
‘Sister Sister has everything – conflict, family secrets and betrayal, all of which go to make it thoroughly deserving of the five stars I’ve given it’ – Brook Cottage Books
‘A truly absorbing psychological thriller’ – Joan Hill, Reviewing Recommended Reads

My Review of Sister Sister

This book is exceptionally well written, features characters with depth, and a plot line that truly intrigued me. This really is a page turner of a book that kept me guessing right up to the very end.

I am going to find this book difficult to review without giving the plot away. So, all I will say, is that the book begins with Claire, who is in a hospital bed. We have no idea what has happened to her, nor the events that led up to her being in hospital, and this very much sets the tone and pace for the entire book. Needless to say, I was hooked.

So, we have a story revolving around two sisters, Claire and Alice,  who are reunited after twenty years apart. Alice was abducted by their dad to live in Australia and, after years of trying to find her, the search was abandoned. Claire even paid for private detectives, but no information was found. So, after twenty years, Alice contacts Claire and her mother, following the death of her father, and she eventually comes back to England. What we the get is a roller coaster of a psychological thriller, as Claire recounts the story of what happened to her.

The central themes in this book are those of betrayal, family and trust. Ultimately for me I kept asking myself the question, can I trust Claire? Is she a reliable narrator? We just don't know. As the story is told in first person narrative, all we have to go on is her word, and this is what makes the story so exciting. I will  admit to the fact that I didn't really like her. I really did not trust what she had to tell me, but I was fascinated by her and her unique story, and I needed to read on to try and find out what had happened to her.

This is also an incredibly uncomfortable read, in the sense that we hear from Claire when she is troubled, and at her most vulnerable. It was hard to be so close to this character when I knew she was suffering. At certain points I did wonder if she was heading for a nervous breakdown.

I will just add that what I found so extraordinarily clever about this book was the way in which Claire's family dynamics changed throughout the developing story, with the changes being so subtle that you don't realise they are happening. I particularly enjoyed reading about the relationship between Claire and her artist husband, Luke, a character who I really liked. I almost forgot at times that I was reading a personal account from a woman who was a successful lawyer, mother and wife, her character throughout the course of the book changes so much, she is altered because of Alice, or is it because of her feelings towards Alice?

So who do we trust? Who is telling the troth? Claire or Alice? I really had no idea, not until the very end, that's how good this book is. If you want an entertaining read that is fast, thought provoking and delves into the heart of the family, then Sister Sister is the book for you. I thoroughly enjoyed it!

Sister Sister is published by Harper Impulse and is available to buy from Amazon here.
With thanks to NetGalley and the publisher for an Advanced Raeder Copy.

Sue is an Amazon best selling author, The Girl Who Lied, reaching #1 in the UK in 2016. Her novel, Closing In, became a best seller in 2014 reaching #1 in the Kobo Romantic Suspense chart. Her originally self-published debut novel, United States of Love, was awarded the INDIE Brag Medallion and later when published by HarperImpulse was short-listed for the Joan Hessayon Award (2014). Sue was also short-listed for the Festival of Romance, New Talent Award (2013). Sue blogs regularly with the on-line writing group The Romaniacs (www.theromaniacs.co.uk).

Lover of cake, Dragonflies and France. Hater of calories, maths and snakes. Sue was born in Hertfordshire but had a nomadic childhood, moving often with her family, before eventually settling in West Sussex.

Sue is married with four children, all of whom patiently give her time to write but, when not behind the keyboard, she likes to spend her time with them, enjoying both the coast and the South Downs, between which they are nestled.