Somebody Else's Boy by Jo Bartlett 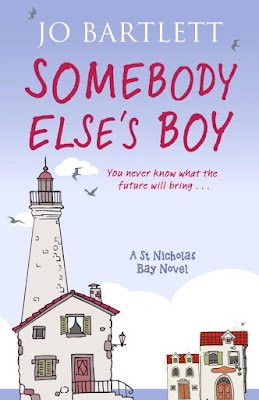 About Somebody Else's Boy (taken from Amazon).
Will Nancy and Jack be allowed to embrace the future, or will their histories forever bind them to the past? Drama teacher Nancy O'Brien puts her ambitions on hold to support her family, and returns to her idyllic seaside home town, St Nicholas Bay. Jack has his own reasons for heading to the Bay; a young widower desperate to come to terms with his loss, he hopes setting up home there with baby son, Toby, might just enable him to survive the future. As Nancy and Jack become closer, not everyone is thrilled, in particular Toby's grandmother, who can't bear to see her late daughter 'replaced'. When Fraser - the only man Nancy's ever really loved - reappears, her living arrangements with Jack seem set for disaster.
My review of Somebody Else's Boy
I was very eager to start reading Somebody Else's Boy as I had heard so many great things about it and I wasn't disappointed. From the very beginning of the book we are introduced to the setting of St Nicholas Bay, a haven for Charles Dickens enthusiasts with novelty gift shops and tea rooms. However there is so much more to this idyllic setting near the south coast and, this is echoed in the wonderful cast of characters that we are introduced to along the way.
Nancy is a drama lecturer at the local college and is daughter to John and Ruth. I really liked Nancy and would love her as a best friend. She is warm, genuine and down to earth. I found myself wanting the very best for her and the scenes with her father most definitely brought a lump to my throat. At her roots, Nancy is a genuinely kind person who has not had the best of luck in life romantically, and when Jack suddenly appears in the Bay, I found myself rooting for the pair of them to get together. To be happy.
This then leads me on to Jack, what can I say? I love him, what woman wouldn't. He lost the love of his life and you just want him to be happy again, to live. But he is in limbo and you cannot help but feel his pain. This state of being in limbo and of not being fulfilled with life is so very true for many of the characters in the book, and I was once again reminded that life is for living, that we need to seize the moment. Who knows what will happen tomorrow?
Father's play a huge role in this book and this theme very much ran as an undercurrent for the entire story. We have Jack who is dad to baby Toby, who has, as a very recent widower, had to learn to raise his son as a single father in the best way that he can. His thoughts, feelings and raw emotion were written beautifully. I felt his grief in every single word. I just wanted to reach into the pages and give him a big hug. The scenes between him and Toby were also written beautifully, sharing that newly formed bond between dad and son. The theme of fathers is also emotionally portrayed in the relationship between Nancy and John. I can't say too much about this without giving away the plot, but the way in which the author writes about their relationship is authentic and from the heart.
Some very serious issues are tackled in this book, but again I can't go into them as it would spoil the story, and I don't want to do that. All I will say is that these issues are dealt with in a sensitive manner and add to the depth of the story. For all of these serious issues though, this is in fact a funny book. It is uplifting in the fact that we are reminded to live each day as if it is our last. To embrace it.

The very core of this book is based upon a beautiful love story, told through many different narratives. The love that a mother and daughter share, the love between father and daughter, father and son. I also really enjoyed the blossoming friendship between Nancy and Jack. The very heart of this book is built upon the love that grows from friendship. 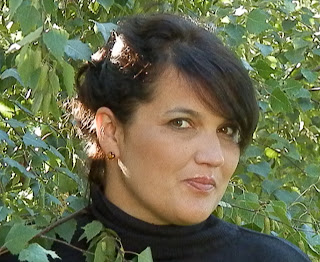 About Jo Bartlett
I’ve made up stories for as long as I can remember, but never really took it any further. Concentrating on my career and family, writing went on the back burner until a catalyst called cancer gave me a major kick up the proverbial.  I decided I was going to write that novel after all.

In 2015 my debut 'Among A Thousand Stars' was published by So Vain Books, which at one point appeared in the top ten of three Kindle charts on the same day.  I also had two pocket novels published by DC Thomson in 2015, which fulfilled my childhood dream of walking into WHSmiths and buying something with my name on it.

I write mainly contemporary women’s fiction, when I’m not knee deep in assignments in my day job as a university tutor. 'Somebody Else's Boy', the first of the four-book St Nicholas Bay series was published by Accent Press in August 2016. This series is set by the sea in Kent, where I live with my own family – so close to the edge of the Channel that we’re practically French.

My ambition is to drink tea and make stuff up on a full time basis, and, if you follow me on Twitter @J_B_Writer, I might even say something interesting one of these days… although I wouldn’t hold your breath.

Many thanks to the author for a review copy in exchange for an honest review.

Somebody Else's Boy was published by Accent Press on 25th August and is available to buy from Amazon here.
Posted by jo at 06:30