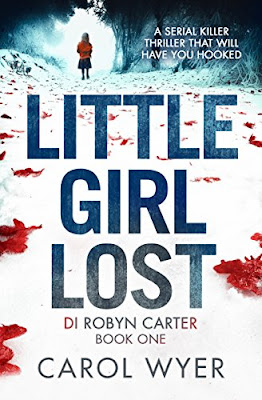 Her breath rose and fell in fearful gasps but it was too late. She could already see what she dreaded most. The back seat was empty.Her little girl was gone.

Abigail lives the perfect life with her doting husband and adorable baby Izzy. But someone knows a secret about Abigail and they want the truth to be told.

When Izzy is snatched from a carpark, it becomes a case for Detective Robyn Carter. Someone has been sending threatening messages to Abigail from an anonymous number. What is Abigail hiding?

Robyn’s instincts tell her there’s a connection between Izzy’s abduction and two murders she is investigating. But the last time she acted on impulse her fiancé was killed. To break this case and earn her place back on the force, she must learn to trust herself again – and fast. Robyn is on the hunt for a ruthless serial killer. And unless she gets to the twisted individual in time a little girl will die …

Gripping, fast-paced and nail-bitingly tense, this serial killer thriller will chill you to the bone. Perfect for fans of Angela Marsons, Rachel Abbott and Karin Slaughter.

My Review of Little Girl Lost
Little Girl Lost is a detective story/fast paced thriller. We begin by reading about Alice, a little girl, who is only eight-years-old,  who lives in a big house with her mother, step dad Paul, and step siblings, Natasha and Lucas. We learn that her mother is engaged to Paul, a big movie actor and that Alice feels rejected and shunned due to this new relationship, as her mother seems to have no time to spend with her.  Her only true friend would seem to be that of her toy rabbit, Mr Big Ears. The prologue deals with a life changing event for Alice, that sets the tone and pace for the entire story. It deals with a sexual assault, upon Alice, and I did find this upsetting to read, as it was fairly graphic in its depiction. I will admit that I nearly gave up reading, but I wanted to give the book a chance, and I am so very glad that I did. This is by far the most graphic and disturbing part of the book, in my opinion at least.
I do feel that the subject matter of the book may not be to everyone's taste, as the novel is centred around child sexual abuse, and is greatly disturbing. But, I do feel that the author tackles this subject with great empathy, sensitivity and knowledge upon the subject. The events that take place are given context, they are not simply there as a 'shock factor', as they are integral to the plot.

So, Little Girl Lost is the first book in the Detective Inspector Robyn Carter series, and I found this character hugely compelling and likeable. Having suffered her own losses in life, she busies herself in her work and is dedicated and passionate.
We are also introduced to Abigail Thorne, and her husband Jackson, who have a little girl, Izzy. It is later on in the novel that they are then introduced to Robyn, as Izzy goes missing. At this point Robyn is investigating the disappearance of Lucas and is convinced that his case is linked to that of several murders that have taken place.
This novel took me a while to get into because of the varying points of view. We read Robyn's thoughts, as well as those of Abigail's and then of Alice, both past and present. However, once I was around a quarter of the way through, I quickly settled into the pace and way of storytelling and found the plot completely captivating. I was gripped until the very end, not knowing who was telling the truth and how all of these separate events were connected. It really is a very clever story.
Little Girl Lost, is a tough read, there is no denying this, simply because of the subject matter. It did however, keep me guessing and thoroughly entertained. I  look forward to reading the second novel in the Detective Inspector Robyn Carter series.
With thanks to the publisher, Bookouture and NetGalley who provided me with an Advanced Reader Copy.
Little Girl Lost is available to buy from Amazon here.

Carol E. Wyer is an award-winning author whose humorous books take a light-hearted look at getting older and encourage others to age disgracefully. More recently she has chosen to write for the "dark side" and embarked on a series of thrillers, starting with the gripping best-seller, Little Girl Lost.
Her book Grumpy Old Menopause won The People's Book Prize Award for non-fiction 2015.
Carol has been interviewed on numerous radio shows discussing 'Irritable Male Syndrome' and 'Ageing Disgracefully' and on BBC Breakfast television. She has had articles published in national magazines 'Woman's Weekly' featured in 'Take A Break', 'Choice', 'Yours' and 'Woman's Own' magazines and writes regularly for The Huffington Post.
Carol is a signed author with Bookouture and Delancey Press.

To learn more about Carol, go to www.carolewyer.co.uk or follow Carol on Twitter: @carolewyer. Carol blogs at www.facing50withhumour.com and www.grumpyoldmenopause.com