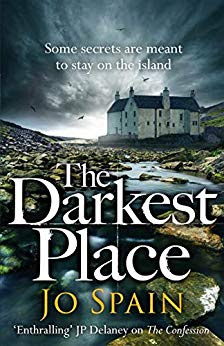 About The Darkest Place

Island of the Lost was the isle's name long before the hospital was built. In winter, they say the fog falls so heavy there that you can't see your hand in front of your face. Storms rage so forcefully you can be blown from the cliffs. Once St. Christina's was built, the name took on a new meaning. Very few who went into that place ever left.'

Christmas day, and DCI Tom Reynolds receives an alarming call. A mass grave has been discovered on Oileán na Caillte, the island which housed the controversial psychiatric institution St. Christina's. The hospital has been closed for decades and onsite graves were tragically common. Reynolds thinks his adversarial boss is handing him a cold case to sideline him.

But then it transpires another body has been discovered amongst the dead - one of the doctors who went missing from the hospital in mysterious circumstances forty years ago. He appears to have been brutally murdered. 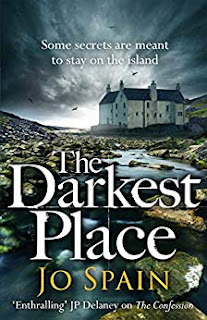 My review of The Darkest Place

This is the fourth book in the DCI Tom Reynolds series and I simply couldn't wait to dive on in. I loved the previous three books and once I started to read The Darkest Place I couldn't put it down. This is one disturbing and eerie read that is based upon Ireland's mental health past. It's a disturbing yet gripping read.

Once I began to read, it was like  being reunited with old friends. We have all the usual favourites, including DCI Tom Reynolds and DS Ray Lennon, who are joined by a cast of interesting characters from the island.

The team investigate the findings of a mass grave on a remote island, the place that was home to a psychiatric hospital. The only way in and out of the island is by a small ferry boat, and that only runs when the waters are calm enough. The desolate building, coupled with the strange inhabitants of the island and buried secrets, creates a story that chills the bones. It unearths the cruel mental health practices that occurred on the island, and in Ireland in  general. While reading, you realise it really wasn't that long ago.

The findings of the mass grave coincide with the disappearance of one of the doctors who worked at the psychiatric institution , over forty years ago. Why was he murdered? What happened to him and why was his body put in the mass grave?

What this book also highlights is the era in Irish mental health health services when the doctor was all powerful. They could pretty much do as they pleased with the patient, most often women, who had no voice, nor power  The scenes that described past practices were deeply shocking, but they needed to be told, as much of this history is still taboo. People simply don't like to talk about what went on but it's important that we learn from the past, so that we never go there and do those things again

The Darkest Place really is about the darkest place on earth, a psychiatric hospital on a remote island, where the doctors were all powerful. Both the island and the remains of the hospital  made me feel claustrophobic. It's a dark and disturbing read with many twists and turns. It's stark, compelling and I raced through the pages. Highly recommended

The Darkest Place is published by  Quercus on 20th Sept.