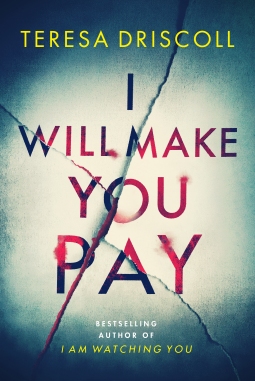 I Will Make You Pay

It seems like an ordinary Wednesday, until the phone rings. A mysterious caller with a chilling threat. Journalist Alice Henderson hangs up, ready to dismiss it as a hoax against the newspaper. But the next Wednesday, the stalker makes another move—and it becomes clear that this is all about Alice.
Someone wants her to suffer, but for what? Her articles have made her a popular local champion—could it be her past rather than her work that’s put her life in danger? Alice is determined not to give in to fear, but with the police investigation at a dead end, her boyfriend insists on hiring private investigator Matthew Hill.
With every Wednesday the warnings escalate, until it’s not only Alice but also her family in the stalker’s sights. As her tormentor closes in, can Alice uncover what she’s being punished for before the terrifying threats become an unthinkable reality?

My review Of I Will Make You Pay 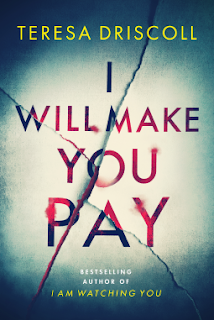 I Will Make You Pay is an addictive psychological thriller that I didn't want to put down. The story revolves around journalist, Alice Henderson, and a threatening phone call at the news desk that sets in motion an unsettling and gripping story.

Who is the mysterious caller? What is the significance of Wednesday? These are the big questions I asked myself while immersed in this fascinating and dark tale. Another big question was that of it the threats were related to her past, of which we learn about as we progress through the book, or if the motive is a more recent one, that is linked to her journalist work in the local community?

I really liked Alice and empathised completely with her situation. I had a huge respect for the decisions she made under such difficult circumstances. I also.wondered why she was being targeted? Who could hate her so much? I also.found the scenes between Alice and her mother particularly poignant.

We then have Matthew Hill, the private investigator who is brought in by Alice's boyfriend to try and solve the mystery.  Matthew is a wonderful character, with so much heart that I was genuinely worried for him, hoping that he wouldn't get huft. His own backstory is also insightful and engaging.

l Will.Make You Pay is an unsettling, dark and disturbing resd. It tackles serious issues that really make you think about how someone's past affects their future. But hosting all it is a riveting read. I wanted to find out why Alice was being targeted and who was behind it all. It really is a compulsive read and I thoroughly enjoyed the story.


With thanks to the publisher for the Advanced Reader Copy.

I Will Make You Pay is published on 10th October by Thomas and Mercer Amazon Pub.