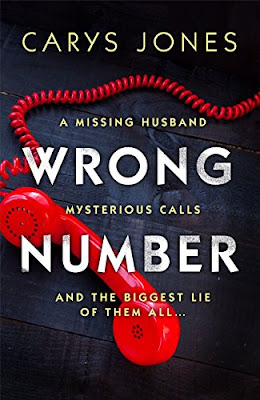 About Wrong Number
Read with caution - you may never want to answer your phone again...
Will and Amanda Thorne are living the dream until, one day, their phone rings. Within 24 hours, Will is missing and Amanda’s world is shattered.

Who was on the phone? Where has Will gone?
Amanda is determined to find her husband and is drawn into a world of drug dealers, criminal masterminds and broken promises.
As the truth becomes clearer, she has to face the terrible possibility that she may never have known her husband at all...
My Review of Wrong Number
Wrong Number is the debut novel from Carys Jones, and is a fast paced psychological thriller that held my attention throughout the entire novel. The story begins when Amanda receives a phone call and what she believes is a wrong number. Although she finds the conversation strange, she puts it to the back of mind. The next day, she wakes early to find that her husband, Will, has already left for work without kissing her goodbye, something that he always does. She finds this strange, coupled with the fact that he has left no note, but it is only when she tries to contact him and there is no response. that she finally realises that he is missing. What happens next is a journey to find out what has happened to Will, and Amanda's life is put in danger.
When I first read the blurb for this book, I was instantly drawn to the idea that one phone call could quite literally change your entire life, that it could tip it upside down, and I wanted to see how the author would deal with this scenario. I have to say that the story that blossomed from this idea is an enjoyable and plausible one. While reading we question how well we know our husband, our wife? Do we ever truly know someone, and if something did happen to them... well, how far would we go to protect that person and make them safe?

Wrong Number was published on December 1st by Aria and can be purchased from Amazon here. With thanks to the publisher and NetGalley for an Advanced Reader Copy.
About the author
﻿

Carys Jones loves nothing more than to write and create stories which ignite the reader's imagination. Based in Shropshire, England, Carys lives with her husband, two guinea pigs and her adored canine companion, Rollo.

When she's not writing, Carys likes to indulge her inner geek by watching science- fiction films or playing video games.

She lists John Green, Jodi Picoult and Virginia Andrews as her favorite authors and draws inspiration for her own work from anything and everything.

To Carys, there is no greater feeling than when you lose yourself in a great story and it is that feeling of ultimate escapism which she tries to bring to her books.