Did You See Melody? by Sophie Hannah #bookreview 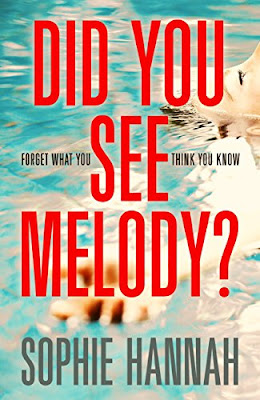 About Did You See Melody?
Pushed to breaking point, Cara Burrows abandons her home and family and escapes to a five-star spa resort she can't afford. Late at night, exhausted and desperate, she lets herself into her hotel room and is shocked to find it already occupied - by a man and a teenage girl.

A simple mistake on the part of the hotel receptionist - but Cara's fear intensifies when she works out that the girl she saw alive and well in the hotel room is someone she can't possibly have seen: the most famous murder victim in the country, Melody Chapa, whose parents are serving life sentences for her murder.

Cara doesn't know what to trust: everything she's read and heard about the case, or the evidence of her own eyes. Did she really see Melody? And is she prepared to ask herself that question and answer it honestly if it means risking her own life?

My review of Did You See Melody?

Did You See Melody? offers a completely fresh take on the tried and tested psychological thriller genre,  that we have all grown to know and love. I do love these type of books, but sometimes they can all feel a little like each other. This is were Did You See Melody? stands alone, it takes this genre and does its own thing. I loved it. It is clever, twisted and hugely relevant to the social media led world that we all live in today.

I am new to the work of Sophie Hannah, so had no idea of what writing style to expect. I fell easily into this book, and enjoyed its rich descriptions, fast paced dialogue and character depictions. It was a very easy book to read and follow in terms of plot, even though the plot was incredibly twisted. The story begins when we meet Cara Burrows, a late thirty something, married woman, who has two teenage children. She has booked a holiday, without her husband knowing, or indeed her children, at the 5-star hotel spa resort called, Swallowtail, in Arizona. She left behind her a note, telling her family when she would return, but did not tell them the holiday location. To begin with we do not know why she has decided to go on holiday without her family, and this instantly piqued my interest. I felt that she must have felt very desperate indeed to fly so far away from her home in England in order to grab some atone time. Would I have done the same in her situation? At the beginning I thought not, but as the novel progressed and we learned the reason for her abrupt holiday, I thought to myself, yes, I would.

It is the night that Cara arrives that the story of Melody begins. She is given the wrong room key and as a result she finds herself standing in a room where a man and young teenage girl are staying. Realising her mistake, she talks to the man, the issue is resolved, and she goes back down to reception. But the situation has left her feeling unsettled and a little shaken. Cara thinks nothing more about the man and girl that she saw, until other events take place in the resort and an elderly woman, who is a frequent guest, tells staff that she has seen Melody Chapa. Nobody believes her, but Cara has a nagging feeling that the old woman may be telling the truth, as she too believes that the young teenager she saw was Melody.

This book is incredibly clever, it is part mystery thriller, part dark psychological read, that deals with the issues of child abuse and child abduction. As the story takes place in America, the author focuses upon the popularity of daytime chat shows and the fictitious Bonnie Juno show, which has followed the Melody Chapa case from the very beginning. I particularly loved the way in which we learned about the Melody Chapa case via the show's transcripts and the various interviews that were available for Cara to watch online. The way in which the novel tapped into the talk show market, and the fact that everyone now wants to be a celebrity, was terribly clever. I did wonder if Bonnie could be trusted, or if she too was just looking after her own interests and guaranteeing her own time on the air.

This book is also full of wonderful, colourful characters. Cara, obviously as the protagonist is hugely readable, but so are the other characters that we meet along the way. Two characters that stood out to me were those of Tarin and Zellie Fry, a mother and daughter, like no other, who are staying at the resort.  I loved these two characters, they made me smile, a lot, and brought a lot of light relief, to what was otherwise a serious read.

I read this book fairly quickly, as I have said, it was an easy read, but I also needed to know if the girl was Melody, and then later on what had happened to her. This book really did keep me guessing to the very end, and I gasped out loud during the final scene. It's a fantastic book and one that I highly recommend for your summer reading.

Did You See Melody? is published on 24 Aug2017 by Hodder & Stoughton, It is available to pre order on Amazon here.


Sophie Hannah is an internationally bestselling crime fiction writer. Her crime novels have been translated into 34 languages and published in 51 countries. Her psychological thriller The Carrier won the Specsavers National Book Award for Crime Thriller of the Year in 2013. In 2014 and 2016, Sophie published The Monogram Murders and Closed Casket, the first new Hercule Poirot mysteries since Agatha Christie's death, both of which were national and international bestsellers.

Sophie’s novels The Point of Rescue and The Other Half Lives have been adapted for television as Case Sensitive, starring Olivia Williams and Darren Boyd. Sophie is also a bestselling poet who has been shortlisted for the TS Eliot award. Her poetry is studied at GCSE and A-level throughout the UK.  Sophie is an Honorary Fellow of Lucy Cavendish College, Cambridge. She lives in Cambridge with her husband, two children and dog.

Email ThisBlogThis!Share to TwitterShare to FacebookShare to Pinterest
Labels: Did You See Melody?, Penguin, Sophie Hannah