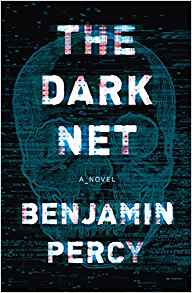 About The Dark Net

The dark net is an online shadowland for criminals to operate anonymously, but when a demonic force begins to hack the minds of its users there is nowhere left to hide.

Twelve-year-old Hannah has been fitted with a high-tech prosthetic that restores her sight, but can't understand why she can now see shadows surrounding certain people.

Lela, an emotionally shut-off, technophobic journalist stumbles onto a story nobody wants her to uncover. A story someone will kill to keep hidden.

A former evangelist, Mike, suffers demons - figurative and literal - and keeps an arsenal of weapons stored in the basement of the homeless shelter he runs.

And Derek, is a hacker who believes himself a soldier, part of a cyber army dedicated to changing the world for the better.

With the virus spreading throughout the net and an ancient evil threatening to break lose on the real world, it falls to these strangers to stop the rising darkness.

My review of The Dark Net 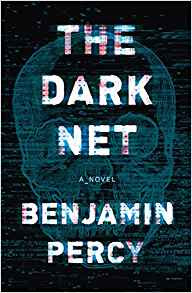 I'll be honest and say that I had absolutely no idea of what to expect when I opened the first page of The Dark Net. But after reading the short prologue I was hooked. Benjamin Percy has such a natural way of writing, that is both compelling and emotive.

The story opens with Hannah, a twelve year old who has the degenerative eye disease, RP. This caught my attention straight away because this is an eye disease which runs in my family, and I thought that the author showed great knowledge and understanding about this condition. What we learn is that she is to be fitted with new technology, enabling her to see the world. From this moment on the story never lets up, I was simply propelled along with it.

What I thought would be a modern day narrative on the dangers of the dark net, was in fact so much more. I am no computer whizz, and I thought I would not fully understand this book, but I did, as it works on so many different levels.  It is a horror slash urbane techno thriller that is packed with demons and the 'good guys' who fight them.  I loved it!

For me, this book was special because of the rich tapestry of characters. We have Hannah, the young girl who is about to embark upon her teenage years, but who is an old soul at heart. She was instantly likeable and not defined by her disability, something that I felt was very important. Then we have Lela, her Aunt, the journalist who both distrusts and dislikes technology. She has a brick of a phone, and only uses the computer when absolutely necessary. Luckily, she has an intern who is tech savvy and is friends with the hacker, Derek. I warmed to Lela instantly, and thought she made a good argument with her lack of enthusiasm regarding the Internet and social media. It got me thinking, as did the book, about how reliant we are upon social media and the Internet in general, and of how dangerous it can be. For me the most interesting character of all was Mike. As a reformed evangelist, now running a homeless shelter, I felt a great deal of empathy for him. I also found his life choice fascinating. It took me a while to figure him out, but when I 'got him', I knew that he would be the character who reasonated most with me.

The Dark Net, although set in a fantasy world where the good guys fight demons, is scarily real. The dark net is out there and the threats mentioned in the book are real. This is why this book is so incredibly thought provoking. It did make me think about our reliance on the Internet, and it made me want to switch off social media for a little while. But most of all this was simply a cracking read. It is fast paced, and left me reeling in places. I highly recommend The Dark Net.

The Dark Net is available to buy from Amazon. It is published by Hodder & Stoughgton on August 3.

With thanks to the publisher and Bookbridgr for a paperback proof copy.