Anatomy of a Scandal @SVaughanAuthor 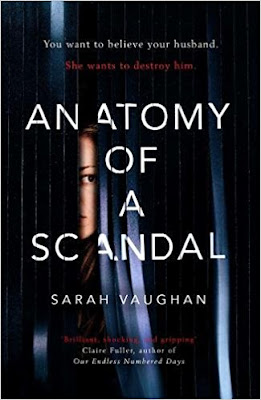 About Anatomy of a Scandal


You want to believe your husband. She wants to destroy him.

Gripping psychological drama for fans of Apple Tree Yard, The Good Wife and Notes on a Scandal.

Anatomy of a Scandal centres on a high-profile marriage that begins to unravel when the husband is accused of a terrible crime. Sophie is sure her husband, James, is innocent and desperately hopes to protect her precious family from the lies which might ruin them. Kate is the barrister who will prosecute the case – she is equally certain that James is guilty and determined he will pay for his crimes.

A high-profile marriage thrust into the spotlight. A wife, determined to keep her family safe, must face a prosecutor who believes justice has been a long time coming.

A scandal that will rock Westminster. And the women caught at the heart of it.

My review of Anatomy of a Scandal 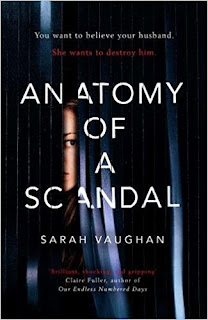 I'll start by saying that this book got under my skin and hooked me from the very beginning. It is a slow powerful read, packed with tension, drama and strong female characters surviving and making an impact in a male dominated environment. I loved this book for its honesty, its tenacity and for female characters who would simply not give up.

Kate Woodcroft is the central character. She is a London based barrister who is assigned the difficult case of prosecuting a man accused of a sexual assault. The man is James Whitehouse, a Conservative MP. He is a powerful man, a personal friend to the Prime Minister, and a man who is rich and living the perfect life. He has the beautiful wife and two beautiful children. All of this perfection is shattered when he is accused of raping a woman who he has had a brief affair with.

We read the alternating viewpoints of James, Kate, and Jane's wife, Sophie. All of these personal stories are important to thoroughly understand what has gone on. The story is told in the present day and also from 1992, as we read the viewpoint from Holly, undergraduate at Oxford University, where James and his future wife (then an on/off girlfriend) were both students. This young woman is from a different world, from a working class background, and it is Holly's viewpoint that I found most illuminating, as it highlighted the extravagance, the sheer arrogance and unpleasantness of James and his friends from the higher classes, the elite, who studied there. Life for them appeared to be easy and one long party.

This book tackles the difficult and sensitive subjects of rape and consent, the personification of women, and of the trial process involved with a rape case. This is an intense read, a dark read and the subject matter will not be for everyone because of its sensitive nature. But I do feel that the novel explores with sensitivity and understanding, the issues of consent, and of how women who have been subjected to a sexual assault are perceived by the media and the general public.

I felt like I was in the courtroom with the victim. It's an intense read, an unsettling one, and some parts, especially within the courtroom setting that went into specific details about the alleged rape, were disturbing. This feeling of unease was further heightened, as I felt like a voyeur, hearing and seeing things that should not be seen or heard.

The issue of rape and consent are tackled with sensitivity and compassion.

Anatomy of a Scandal is a sharp, gripping and emotional court room drama that explores sexual crime from all angles. It's an uncomfortable read, but an important one and, a read that is hugely relevant today. It simply is a stunning book.

Anatomy of a Scandal is published by Simon & Schuster UK on 11 January 2018.