In a Cottage in a Wood by @CassGreenWriter 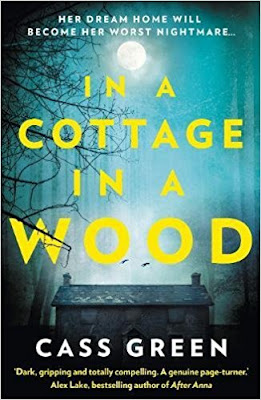 About In a Cottage in a Wood

Her dream home will become her worst nightmare…

A dark and twisty psychological thriller from the No.1 ebook bestselling author of The Woman Next Door.

Neve comes across a troubled woman called Isabelle on Waterloo Bridge late one night. Isabelle forces a parcel into Neve’s hands and jumps to her death in the icy Thames below.

Two weeks later, as Neve’s wreck of a life in London collapses, an unexpected lifeline falls into her lap – a charming cottage in Cornwall left to her by Isabelle, the woman on the bridge. The solution to all her problems.

But when Neve arrives, alone in the dark woods late one night, she finds a sinister-looking bungalow with bars across its windows. And her dream home quickly becomes her worst nightmare – a house hiding a twisted secret that will change her life forever…

My review of In a Cottage in a Wood 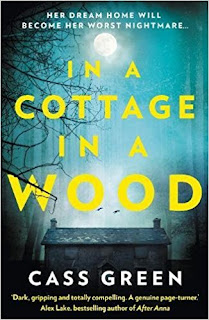 I'll start by just saying that I absolutely loved this book. What a fantastic read. This dark thriller hooked me from the very beginning!

In a Cottage in a Wood revolves around Neve, a woman in her thirties who seems to be lost in life. Having recently broken up from her long term boyfriend, Neve is living with her sister, brother-in-law and their two children. She is working in a job that she does not love but which pays the bills. Her life dramatically changes one night when walking home alone after a disastrous Christmas works' party and one night stand. While crossing Waterloo Bridge, she spots a woman alone, who is inappropriately dressed and whom she thinks needs help. She stops to talk, against her better judgement, and offers the woman money for the night bus. But what she gets is a parcel thrust into her hand and a parting cryptic message, before the woman jumps to her death. This is when the real story begins.

The pace is deliciously slow, as we follow Neve to Cornwall. Isabelle, the woman on the bridge, made a death bed wish of bequeathing her home to Neve. The contents and everything within it now belong to her. So with nothing to lose, and with Neve seeing this opportunity as a chance to re-evaluate her life, she makes the instant decision to head to her now new home.

The contrast between bustling inner city London and the quiet of the Cornish countryside are startling on the page. As soon as Neve enters the cottage there is a definite sense of foreboding. The descriptions of the cottage are detailed, so that I felt I was living there with Neve. I also liked the clever way in which the cottage echoed Neve's feelings and where she was at that moment in time. The cottage appeared to be a cold and uninviting space, a place where Neve did not belong. The remoteness of the cottage is also heightened because Neve does not drive. She almost appears to be trapped, the cottage drawing her in, keeping her captive. But she feels she has to stay, to figure out who Isabelle was and why she took her life. It consumes her.

This is such a clever read. When Neve suspects that all is not right with the cottage she begins to question those around her. Isabelle's brother, Richard, who lives nearby and the couple whom she quickly befriends. The real question is who can she trust?

In a Cottage in a Wood is a psychological thriller that has a big twist that I honestly didn't see coming. It held my attention, was entertaining and thoroughly creeped me out. It really is  a fabulous read!

In a Cottage in a Wood is published by Harper Collins on 21 September. It can be found on Amazon here.