The Shadow District by Arnaldur Indridason 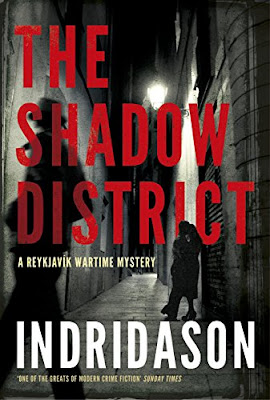 About The Shadow District

In wartime Reykjavik, a young woman is found strangled behind the National Theatre, a rough and dangerous area of the city known as ‘the shadow district’. An Icelandic detective and a member of the American military police are on the trail of a brutal killer.

A 90-year-old man is discovered dead on his bed, smothered with his own pillow. Konrad, a former detective now bored with retirement, finds newspaper cuttings in the dead man’s home reporting the shadow district murder that date back to the second world war. It’s a crime that Konrad remembers, having grown up in the same neighbourhood.

Why, after all this time, would an old crime resurface? Did the police arrest the wrong man? How are these cases linked across the decades? Will Konrad's link to the past help him solve the case and finally lay the ghosts of wartime Reykjavik to rest?

My review of The Shadow District 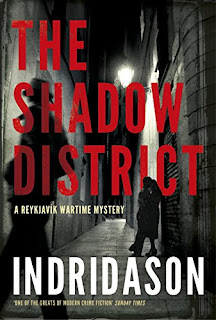 I have been a huge fan of Arnaldur Indridason for many, many years. I read Jar City in a day and hungrily devoured the following books in the series. All equally as thrilling. The Shadow District is a complete change of direction, featuring new characters, and is the first book in his new series. I loved it! We still have murder and deceit at the core of the novel, told by a skilled storyteller.

The Shadow District is a story set in Reykjavik in the present and in the past. The present day story focusses upon Konrad, a retired detective, who helps in the case involving the death of a 90 year old man. It is while helping in this case, that he finds newspaper clippings in the man's flat, relating to a murder case from the Second World War, which he remembers well, even though he was only a child. The murder took place in the city's Shadow District, behind the National Theatre. The two stories although separate, share a link with the dead man. What follows is an interesting, intense and dark read that I found thoroughly gripping. It is a murder mystery and I genuinely couldn't figure out the ending.

I can't go into any more detail without giving away spoilers, but all I will say is that the storyline is a complex one and although slow to begin with, is well worth the wait. As with all Arnaldur Indridason's novels, there is much to be said about the fine detail that he gives to everyday life. You need to savour his writing, absorbing the imagery and environment, in order to fully understand the actions within the novel.

This is a fantastic murder mystery of a book, but for me it was the depiction of Reykjavik during the Second World War that captivated me. Although decades ago, the storyline was so so real, the characters engaging and the emotions of the day so raw, that I understood completely what life must have been like.

The Shadow District is very much a mystery, not a thriller. It is a slow read, and as I have said, one to be savoured. But I liked this pace, and the fact that I got to know the characters. If you love your Scandinavian literature, a good old murder mystery and history, then this is the book for you. I thoroughly enjoyed it.

The Shadow District was published on May 18th by Harvill Secker and can be found on Amazon here.