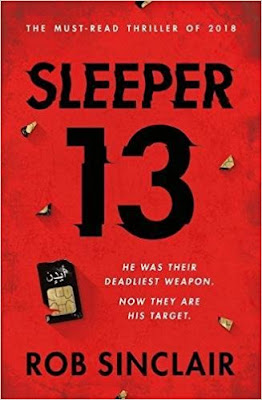 An action-packed and utterly gripping, globetrotting thriller from the bestselling author of The Enemy Series - for fans of I AM PILGRIM by Terry Hayes, ORPHAN X by Gregg Hurwitz and NOMAD by James Swallow.

Smuggled to the Middle East as a child.

Trained as one of the most elite insurgents of his generation.

Forced to do things no one should, for a cause he couldn't believe in.

But as his brothers were preparing to kill, he was looking for a way out.

Now, on the eve of the deadliest coordinated attacks the world has ever seen, he finally has his chance.

He will break free and hunt down those who made him a monster.

He must draw on all his training to survive. 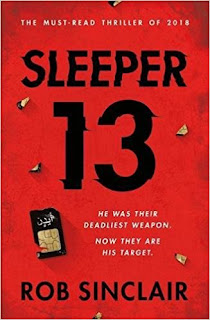 My review of Sleeper 13

Wow! I loved this book! What an absolute roller coaster of a read. This book has everything and quite literally took my breath away with its sheer energy and fast paced narrative.

Sleeper 13 refers to Aydin, a young man who was abducted as a child and sent to a place called 'The Farm' in Afgahistan, where The Teacher taught him, and twelve other boys to be an insurgent. All become deadly walking machines, but now, as a young man, Aydin wants out, and he wants to make those who are responsible pay.

This novel focuses upon multiple narratives, with the two most prominent being Aydin, and the lone MI5 Agent who is chasing the infamous 13, Rachel Cox. You couldn't get two more different characters,  and I enjoyed reading their alternating narratives. We read Aydin's point of view and this young man captured my full attention. A young man who although a trained killer and radical extremist,  desperately wants to leave this life behind. He wants to break free and to stop the planned attacks that will cause worldwide devastation. He fascinated me and my opinion of him shifted from negative to positive as I progressed through the novel.

I also completely understood Agent Cox's motives and needs to go undercover and to find the 13 young men. Here is a strong and determined woman who is strong not only in her physical pursuits, but also in her strength of mind. I had great respect for this character.

The real joy of reading this book is in the racing speed nature of the narrative. There really is no let up as we go from one drama to the next within milliseconds.  I couldn't turn the pages quickly enough. The sheer amount of detail in regards to setting and the environment in which the novel is set is also breathtaking. I lived and breathed every moment.

Sleeper 13 is one cracking read that you simply won't be able to put down. I also feel that Aydin will haunt my thoughts for a very long time.

Sleeper 13 is published by Orion in ebook on March 1. It can be found on Amazon here.