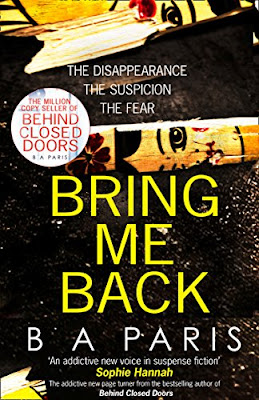 About Bring Me Back
A young British couple are driving through France on holiday when they stop for gas. He runs in to pay, she stays in the car. When he returns her car door has been left open, but she's not inside. No one ever sees her again.

Ten years later he's engaged to be married; he's happy, and his past is only a tiny part his life now. Until he comes home from work and finds his new wife-to-be is sitting on their sofa. She's turning something over in her fingers, holding it up to the light. Something that would have no worth to anyone else, something only he and she would know about because his wife is the sister of his missing first love.

As more and more questions are raised, their marriage becomes strained. Has his first love somehow come back to him after all this time? Or is the person who took her playing games with his mind?

My review of Bring Me Back 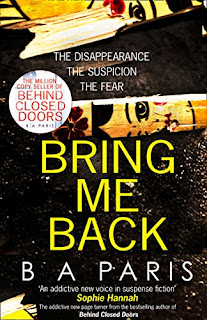 Bring Me Back is one clever and twisted read that thoroughly entertained.  From the very beginning I was sucked into this psychological drama, wanting to learn the truth about what had happened to Finn's girlfriend, Layla, on the night that she disappeared twelve years previously. Was she taken?  If so, then who took her? Did she leave of her own accord?  And at the back of my mind the most important question of all, that of, did Finn hurt her? This novel throws up so many questions about what happened that fateful night,  and what is to happen in the future. It also made me wonder who you could really trust.

So, the book is set both in the present day and in the past. We learn of how Finn met Layla, of their frantic and fierce love for one another, of how he saved her, and of his early life in London with his friend, Harry. This is interspersed with present day events of his life now, married to Ellen, Layla's sister, who is the complete opposite in every way.

As I read this unfolding story, of how Finn was being targeted with memories of Layla, and only ones that he would know, I couldn't help but feel sorry for him. Why was he receiving Russian dolls? Who was behind them? Could it be Layla? These questions opened up the possibility that Finn could have hurt her. That she had fled. But I waa left in the dark until the very end of the novel.

This is a twisted psychological thriller with four captivating central characters. I adored Harry, the loyal friend, but really couldn't get a true grasp on Ellen. I really didnt know what to make of her, and if she really loved Finn. As for Finn, I did like him, I felt sorry for him, and I just wanted him to be happy, although I couldn't quite shake off the fear that he had something to do with Layla's disappearance.

Bring Me Back is an addictive read, in that the chapters are relatively short and that I found myself racing through the pages in my hunger to know what had really happened to Layla. This book got under my skin. It tackles  the subject of all consuming love, relationships, and how we can possibly live once that love is lost.  I found myself thinking about Finn, Layla and Ellen, long after I had read the final word.