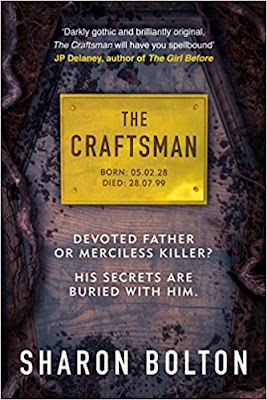 His secrets are buried with him.

Florence Lovelady's career was made when she convicted coffin-maker Larry Glassbrook of a series of child murders 30 years ago. Like something from our worst nightmares the victims were buried...ALIVE.

Larry confessed to the crimes; it was an open and shut case. But now he's dead, and events from the past start to repeat themselves.

Did she get it wrong all those years ago?
Or is there something much darker at play?


My review of The Craftsman 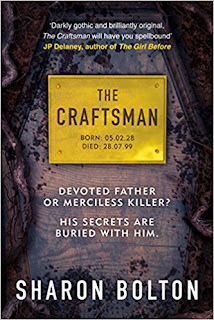 The Craftsman is a dark, disturbing and beautifully seductive read that I devoured in just a few short sittings. It's a book about life in a small rural Lancashire community, about the strength of women, and that overwhelming sense of how community  can both suffocate and alienate those with differing views. I loved this book.

The book works on two timelines, present day narration set in 1999, and a story from 1969. Both stories take place in Pendle, Lancashire, and feature Florence, the young police constable who then goes on to become an Assistant Commissioner. Florence is the character who joins the past to the present day events, together with Larry, the man whose funeral she attends in 1999. The  man who was convicted of child murders. But the book asks, was it really him? As I read the story from the past I was convinced that Larry was indeed the killer, but, as I progressed through the book, towards the present day, I wasn't so sure.

This book has a wonderful  maleavelance about ir. From the subject matter of the coffin maker, the dark and foreboding Pendle landscapee, and the historic reworking of the Pendle witches; the imagery that is conjured up while reading this book is in keeping with the people who live there. They are bound together. And, even though Flora left the area over thirty years previously, she finds herself drawn back to Pendle, to the home in which she lived, and to Larry Glassbrook.

In 1969 Florence finds herself in the middle of an investigation involving a missing 13-year-old girl called Patsy Wood. It is during this investigation that we truly get a sense of the way in which women are viewed in the village, and especially within the local police force. Florence was very much seen as the token girl who was placed there to make the tea.

This really is an addictive, powerful and emotive read, that focuses upon the strength of women. I loved it!

The Craftsman is published on May 3 by Trapeze and can be found on Amazon here.