The Handsworth Times by Sharon Duggal 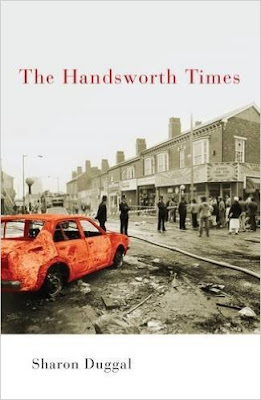 About - The Handsworth Times
﻿
Mukesh Agarwal sits alone in the Black Eagle pub, unaware that a riot is brewing or that Billy, his youngest son, is still out on his bike ...A mile away in the family home in Church Street, Anila, one of the three Agarwal girls, is reading Smash Hits and listening to Radio One as she sprawls across the bottom bunk, oblivious to the monumental tragedy that is about to hit her family ...It is 1981 and Handsworth is teetering on the brink of collapse. Factories are closing, unemployment is high, the National Front are marching and the neglected inner cities are ablaze as riots breakout across Thatcher's fractured Britain. The Agarwals are facing their own nightmares but family, pop music, protest, unexpected friendships and a community that refuses to disappear all contribute to easing their personal pain and that of Handsworth itself.THE HANDSWORTH TIMES is a story of loss and transition, and pulling together because ultimately, there is such a thing as society.
My Review of The Handsworth Times
The Handsworth Times is a raw and emotional read that draws you in from the very first page. Set in the early 80's, we are taken back in time to when there where no smartphones, internet and when people relied upon their local community and newspapers to find out the local gossip and news stories of the day. I loved this book for its nostalgia, lyrical storytelling but ultimately because at its heart was the story of a family learning to live with loss and prejudice.
The story opens with the father and head of the household, Mukesh Agarwal, sitting alone in a pub in the Handsworth area of Birmingham. He appears to be a lonely man, sat alone with just his thoughts and as the story progressed, my sorrow for him grew. It is while he is sat in the Black Eagle pub, that the riot begins and which ultimately leads to a tragedy within the family.
Although set in the 80's, this book could very well be set in modern day Britain. The issues that surround migrants, post Brexit and how we are now a nation that both embraces and fights against ethnic diversity, could be transferred so easily into this book. The problems within society have not changed, they have just been given different labels.
So the Agarwal family live in the Handsworth area of Birmingham that is home to many different cultures and belief systems, and it is because of the tragedy that the family endures, that these different cultures come together, in a way that would not have been possible before. This is a book about community, about how a community can divide itself because of its different belief systems, race, culture etc., but that at the end of the day, when a tragedy  occurs and that particular community is on the brink of collapse, the only way to fight and to stand up for what you believe in is to stand together.
This book is full of wonderfully captured characters. The mother, who keeps the home together is a strong and independent woman who finds her inner strength when those around her lose their focus and love of life. She was by far my favourite character. However, I also thought that all of the children in the book had their own distinct voice and story to tell. Together through all of the various different storylines that run throughout the book, we get a glimpse into a life that was dominated by prejudice, social insecurity and poverty. On paper, you would think that this would mean that the book was somehow despondent and a tale of how life used to be for those who where less well off - living hand to mouth, but this is not the case.
Handsworth Times is an uplifting book about the importance of family, friendships and community. Above all else, this book makes you think about what you value most in life - and the answer should always be that of family.
The Handsworth Times can be bought from Amazon here
About Sharon Duggal
Sharon Duggal was born to parents who immigrated from the Punjab, India and she grew up in and around Handsworth, Birmingham. She lived in London for many years and now lives in Brighton & Hove. She is a writer, campaigner, community radio presenter (alongside one of her sons), a daughter, sister, mother and partner, amongst other things. She works in arts and literature development and has an MPhil in Creative Writing from the University of Sussex. The Handsworth Times is her first novel.