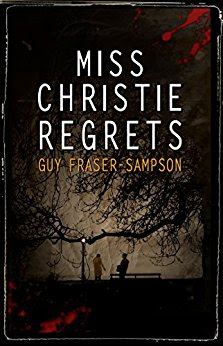 “a neatly lacquered puzzle-box filled with golden-age trickery, as warm and timeless as crumpets and honey; a murder to curl up by the fire with on a winter’s night” - Christopher Fowler, author of the bestselling Bryant and May mysteries

The second in the Hampstead Murders series opens with a sudden death at an iconic local venue, which some of the team believe may be connected with an unsolved murder featuring Cold War betrayals worthy of George Smiley. It soon emerges that none other than Agatha Christie herself may be the key witness who is able to provide the missing link.

As with its bestselling predecessor, Death in Profile, the book develops the lives and loves of the team at 'Hampstead Nick'. While the next phase of a complicated love triangle plays itself out, the protagonists, struggling to crack not one but two apparently insoluble murders, face issues of national security in working alongside Special Branch.

On one level a classic whodunit, this quirky and intelligent read harks back not only to the world of Agatha Christie, but also to the Cold War thrillers of John Le Carre, making it a worthy successor to Death in Profile which was dubbed 'a love letter to the detective novel'.

My Review of Miss Christie Regrets

This is the first novel I have read by Guy Fraser-Sampson, and what a treat it was. This is the second book in the Hampstead Murders series, so I now need to go back and read the first book!

So, this book begins with a couple visiting Burgh House, a museum that is located in Hampstead, London. From the very first page, I was transported back in time because of the description of these two characters and the way in which they spoke to one other. It is while Detective Sergeant Kate Willis and her boyfriend, psychologist Peter Collins, are visiting the museum, that a murder takes place. As Kate is already at the scene, even though she is off duty, she calls it in and the investigation begins.

A man is found murdered in his office, slumped at his desk, and so the museum is closed and everyone within the building is questioned by the police. From this very moment, I had no idea who had committed the murder, as there were several suspects throughout, and I was genuinely shocked to find out the killer's identity at the end of the book. What is so very clever about this novel, is that there is a second mystery to be solved, that which surrounds a corpse that is found in a nearby block of flats, that are being renovated. Although the two murders are apparently unrelated, Detective Superintendent  Simon Collinson, who has been called in to oversee this particular murder, is convinced that the two murders are linked. What ensues is a highly enjoyable murder mystery that is reads like a classic detective story from days gone by. The entire tone of this novel, from the way in which the police work is carried out, to the language that is used, harks back to the Golden Age of detective writing. Although set in the present day, it really does feel as though you are reading a classic piece of detection work, and I found this such a treat.The Agatha Christie element of the story stems from a link to the block of flats where the corpse is found. I don't want to spoil the plot, but this aspect is very interesting, and if you love Agatha Christie novels, then you will love this plot twist.

As well as investigating the two murders, past and present, we also have some very interesting relationships that are unravelled before us and a gentle love triangle that needs to be resolved. Kate Willis lives with her boyfriend, Peter Collins, but she is also in love with Detective Sergeant Bob Metcalf, whom she works with. This love triangle is a complicated one. Peter lives in a fantasy world that is inspired by the likes of Lord Peter Wimsey, and on many occasions he refers to Kate as Harriet. Although Kate loves this world, she cannot keep up with the pretence, even though she loves Peter  She needs to live and feel reality. This is where Bob comes in, the polar opposite of Peter. But can the two of them make a life together?  Can she truly let go of Peter? All of the characters in this book are intriguing, well written and fully rounded. I particularly liked Bob Metcalf and his no nonsense persona. But I also enjoyed reading the dialogue between Simon and Kate. Their relationship almost came across as that of father and daughter.

Miss Christie Regrets is an old fashioned detective story set in today's modern and high tech world. You will find no blood, guts, gore or profanity in this book, which I found quite refreshing. It is a completely different read, and if you fuly immerse yourelf in this nostalgic world, then you are in for a real treat.

With thanks to the author and Urbane Publications for a paperback Advanced Reader Copy.

Miss Christie Regrets is published by Urbane Publications on January 12th in both ebook and paperback.

The Amazon link can be found here.﻿

GUY FRASER-SAMPSON is an established writer, previously best known for his 'Mapp and Lucia' novels, which have been featured on BBC Radio 4 and optioned by BBC television. His debut work of detective fiction, Death in Profile, the first in the Hampstead Murders series has drawn high praise from fellow crime writers as well as from readers on both sides of the Atlantic.