The Liar by Jennifer Wells 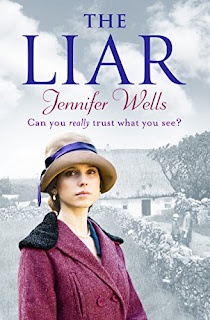 1935. A mother's journey to find out what really happened to her only daughter. Complex and intriguing, full of twists and turns. Perfect for the fans of Lesley Pearse and Dilly Court.

What would you do if you saw a girl in a crowd whose face had the same, identical birthmark as your only child?

A child who, nearly ten years ago, you were told died?

It's 1935 and housewife Emma glimpses a face in a crowd – a little girl with a very unique birthmark.

Transfixed by the sight of a stranger; Emma becomes convinced that the girl is her long-lost daughter taken from her at birth. There is only one problem: Emma's daughter is dead. So who is the stranger?
THE LIAR follows Emma's journey as she tries to find out what really happened to her daughter – a journey that unearths secrets from the past and ends in obsession...

'An intriguing mystery that keeps you guessing ... If you like compelling mysteries you will love this well written story' Rosie Clarke.


My review of The Liar
﻿
The Liar is set in the summer of 1935. We are first introduced to Emma, whose baby daughter sadly died 9 years ago, shortly after birth. Her baby, Violet, had a very distinctive birthmark on her face, that looked like red tears. From the very first page, I was hooked. I loved this book, I loved every aspect of it.

So, Emma is married to a respectable man, George, who is the village doctor. They live in a large house and she practically wants for nothing, nothing that is but her lost child. The loss of this child has caused a rift between E!ma and her husband, a rift that was probably there before the tragic death of their daughter, but it now appears that even though she lives in this wonderful house, with a wealthy and respectable man, she is in fact all alone in the world.  She is locked into a loveless marriage. George believes that Emma should simply forget about the bsaby, and carry on with her life, but Emma cannot do as he asks.

The book begins when  Emma spots a little girl, aged around nine years old, who has a red teared birthmark on her cheek. She is convinced that this girl is her dead daughter and so the story for seeking truth about what really happened begins. This girl is known as Ruby and lives a completely different lifestyle to that of Emma.  She is brought up in extreme poverty, with her mother, Maude, having to resort to washing and dying aprons to make ends meet. The household is cruel and cold, and my heart ached for little Ruby.

Emma and Ruby both tell thrir own unique story, with the two stories inevitably becoming one. I enjoyed reading about both of these characters. Emma, at times could be a little infuriating, and I found her to be a little bit spoilt in her ways, but I did like her and I wanted her to get to the bottom of who Ruby really was. As for Ruby, well, this child had guts, a sharp tongue and a way of making everyone like her. She also deserved so much better in life.

This book is beautifully written. It is sensitive in its choice of topic matters, those about the death of a child, poverty and abuse. Even though the book is set in the 20s and 30s, for some reason I felt that I was reading about a modern day setting, and modern day issues, and I mean this in a good way. The issues that were relevant back then are still relevant today, those of love, lost love, death, poverty and human cruelty.

The Liar is also very different to what I perceived it to be, from the blurb and cover. I thought it would be a light, historical thriller. But what I got was  a dark, psychological thriller of a read with an ending that was truly shocking... I really didn't see it coming. This really is a cracking debut novel, from beginning to end, and I can't wait to read the next novel by Jennifer Wells.

With thanks to NetGalley and the publisher, Aria, for an eBook review copy.

The book is available to purchase from Amazon here.

Jennifer Wells works in Market Research when not writing. She lives in Devon with her young family and cat. The Liar is her first novel, she is busily working on her next. . .