The Mountain by Luca D'Andrea @maclehosepress 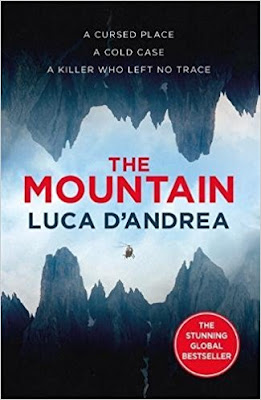 Salinger blames himself. The crash was his fault. He was the only survivor. Now the depression and the nightmares are closing in. Only his daughter Clara can put a smile on his face.

But when he takes Clara to the Bletterbach - a canyon in the Dolomites rich in fossil remains - he overhears by chance a conversation that gives his life renewed focus. In 1985 three students were murdered there, their bodies savaged, limbs severed and strewn by a killer who was never found.

Salinger, a New Yorker, is far from home, and these Italian mountains, where his wife was born, harbour a close-knit, tight-lipped community whose mistrust of outsiders can turn ugly. All the same, solving this mystery might be the only thing that can keep him sane.

Translated from the Italian by Howard Curtis 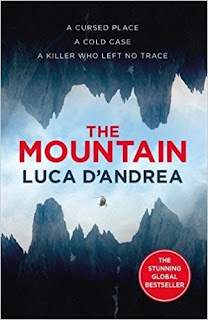 My review of The Mountain


A CURSED PLACE. A COLD CASE. A KILLER WHO LEFT NO TRACE.

The Mountain is a book that I just couldn't put down. It's a fast paced thriller set in the small Italian village of Siebenhoch, nestled amongst the backdrop of the Italian Dolomites. I loved every single page.

From the moment I read the blurb and the above tag line, I just wanted to dive on in, and from the very first sentence I found myself in this world of ice, old stories and of course, the deep canyons.

The Mountain is told from Jeremiah Salinger (everyone calls him Salinger), the only survivor of a helicopter crash. This incident is responsible for a change in Salinger's character and wellbeing, as he finds himself depressed, with his marriage taking the strain. As a father to five-year-old Clara, she is the only one who is able to pull him out of his depression. It is while visiting the Bletterbach, a deep canyon with a visitors centre, that he overhears a conversation about three young people who were muttered there in 1985, that he finds a purpose in life, as he sets out to find the killer.

I loved the story of a man, a writer of documentaries, who becomes obsessed with the environment in which he lives. As a New Yorker living with his wife and young daughter in the tight knit community of Siebenhoch, which is also were his wife grew up, he very much finds himself as an outsider, almost a visitor, as he tries to win his place in the community. However, after the accident on the mountain, involving the helicopter Mountain rescue team, in which he was observing and videoing the team at work, it is not only himself who he blames for what happened, the community does too. Then, when he decides to investigate what happened to the three young people on the Bletterbach, he finds further animosity as he seeks the truth. Alienating himself further from the local community.

This is Salinger's story and I hung on to every word. His tale of guilt, obsession, his downwards spiral. The remoteness of the mountains, helping to echo his own isolation, both physically and mentally.  I also particularly liked his conversations with his father-in-law, Werner, who lived nearby, as hey sat and smoked, while drinking grappa. I warmed to Werner instantly, as did Salinger.

The Mountain is a breath catching thriller, I honestly didn't know who was responsible for the killings, and my loyalties kept shifting throughout the book. Although the investigation was fascinating, as well as the back story, what truly captivated me was the writing and writing style. It is lyrical at times, and almost part fairytale. The writing is beautiful. It is a story within a story, and this author is a gifted storyteller. The Mountain really is the perfect thriller to read this Winter.

With thanks to the publisher and Bookbridgr for the hardback copy

The Mountain is published on 30 November by MacLehose Press and can be found on Amazon here.
Posted by jo at 05:00