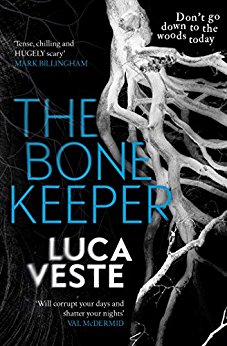 About The Bone Keeper

What if the figure that haunted your nightmares as a child, the myth of the man in the woods, was real?

Twenty years ago, four teenagers went exploring in the local woods, trying to find the supposed home of The Bone Keeper. Only three returned.

Now, a woman is found wandering the streets of Liverpool, horrifically injured, claiming to have fled the Bone Keeper.  Investigating officer DC Louise Henderson must convince sceptical colleagues that this urban myth might be flesh and blood.  But when a body is unearthed in the woodland the woman has fled from, the case takes on a much darker tone.

The disappeared have been found. And their killer is watching every move the police make.

My review of The Bone Keeper 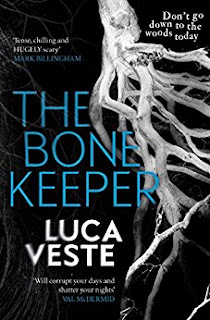 Wow, well The Bone Keeper was an absolutely creepy and bone chilling read. Not many books get under my skin and crate a true sense of unease, but this book did just that. Perhaps because it was about the fears that all children face, and that we have all feared the Bogeyman at some point in our lives. Whatever it was, I was very much unsettled.

I haven't picked up a book by Luca Veste before. In fact, I had never really heard of his books until I saw the cover  for The Bone Keeper posted on twitter. That image, together with the compelling blurb, made me want to pick it up and dive on in. And, I'm so glad I did.

Everything you need to know about The Bone Keeper you can grasp from the book description. I don't want to say any more as there are so many twists and turns which are delightful to read. What I will say, is that the female protagonist, DC Louise Henderson, is fascinating. As the lead investigating officer, she is in charge and finds herself trying to convince her team that the Bone Keeper is real. Here is a woman who is both strong and professional, yet vulnerable and who has to face her many demons while investigating this case. The book worked for me because of her, and my belief in her character.

The book is a fast read, with beautiful writing and imagery that conjures up the spookiness of the woods and those urban myths that we all heard as children. There is something intrinsically haunting about this book. It's frightening because what happens could happen, and often does happen in real life. The disappearance of a child that is never solved. It's something that forever lurks in the back of your mind. Something that you wish will never happen to your family. That is the real bones of this book.

The Bone Keeper is a chiller thriller read. It's a quick, let's turn the pages and find out what happens next, kind of a read. It's also incredibly unique within the crime genre. I've never read anything quite like it. So, if you love your crime fiction that is a little different and which will truly give you the creeps, you can't go far wrong with The Bone Keeper. I loved it.

The Bone Keeper was published on 8th March by Simon and Schuster.